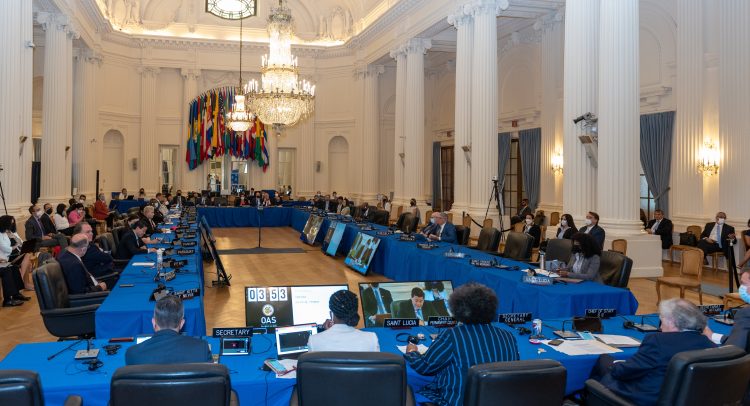 San Jose, 20 May 2022 (IICA). – The rising costs of fertilizer around the globe due to the war in Eastern Europe are putting at risk agricultural production in the Americas and, in turn, global food security, compelling international technical cooperation agencies and financial institutions to join forces to find a solution.

This was the view expressed by Manuel Otero, Director General of the Inter-American Institute for Cooperation on Agriculture (IICA), to the Permanent Council of the Organization of American States (OAS).

“Our countries are not neutral in this crisis, since we are price-takers in the global fertilizer market. Price hikes jeopardize any profitability equation for agriculture and increase the risk of exclusion of small-scale farmers”, declared Otero, who was invited to make an opening presentation before the body debated and voted on the resolution entitled “Rising fertilizer costs and their impact on the development of sustainable agrifood systems in the region”.

The approved resolution, presented by Harold Forsyth, Permanent Representative of Peru to the OAS, affirms that the impact of high fertilizer costs on food production and supply is a key area of concern for the OAS Member States. The Permanent Council resolved to monitor the situation with the support of regional agencies, such as IICA, the Inter-American Development Bank (IDB), and CAF – Development Bank of Latin America.

IICA’s Director General explained that the world market is saturated with chemical fertilizers and many countries in the Americas are highly dependent on imports. He revealed that countries like Costa Rica, Guatemala, Chile and Brazil use 300 to 600 kilos of fertilizers per hectare of arable land.

Otero explained that other countries in the region are net food importers and are vulnerable to the rising costs of agricultural products, naming specifically Central America’s Northern Triangle and the countries of the Caribbean, especially Haiti. In this sense, he explained that significant heterogeneity exists in the hemisphere, where food exporters coexist with food importers, major companies with family farmers, and large-scale production with niche agriculture.

“In our current circumstances, our strength lies in our diversity”, Otero concluded. “Our region is the largest net exporter of food in the world. Our continent is called on to be the guarantor of food, nutritional and environmental security for the planet”.

The Director General of IICA expressed the institute’s willingness to work alongside other international entities to find practical solutions to the food crisis.

He also informed the Council that IICA launched the Public Policy Observatory for Agrifood Systems (OPSAa, for its acronym in Spanish) in March, which has fast become a key tool in helping the countries to navigate this period of uncertainty and instability, marked by the confluence of multiple crises.

“We thank Otero for his convincing presentation on an issue that was unknown to us. Our organization must take action on the issue of fertilizer costs, as it is vital for the survival of our people. Regional food security is at risk; the ghost of hunger could overcome a significant portion of our societies”, stated Ambassador Forsyth.

Representative Otávio Brandelli of Brazil expressed his concern given that Brazil, as a large exporter of food, is also a large importer of fertilizers. “One of every four plates that is served around the world contains food from Brazil”, he announced.

Ambassador Hugh Adsett from Canada thanked Otero and stressed that it must not be forgotten that the current situation was motivated by Russia’s invasion of Ukraine.

Argentine representative, Carlos Raimundi, called Otero’s presentation “valuable” and affirmed that Argentina, as an exporter of agricultural products and inputs, “isn’t that affected by the rising costs, but rather by the market volatility”.

Ambassador Alejandro Ordóñez Maldonado from Colombia said that Otero’s presentation was “eye-opening” and asserted that the prevailing situation could lead to a loss of productivity or even the suspension of sowing.

“Otero was clear and convincing, giving an overview of the issue of food across the continent. IICA’s contribution helps us to think in global terms. Uruguay is a traditional agroexporter, like other South American countries. Food production is part of our tradition and our culture. Therefore, this issue is extremely relevant”, remarked Washington Abdala, Ambassador from Uruguay.

Ambassador Rita Claverie Díaz from Guatemala praised “IICA’s ongoing commitment and for recognizing agriculture as an instrument of peace”, warning that the surging prices could lead to reduced use across the region.

Lastly, Dominican Republic’s representative Josué Fiallo stated that Otero’s presentation was “valuable” and that “concrete action and coordinated work [was needed] to tackle this situation, which is a threat”.

Featured Image – Permanent Council of the Organization of American States. Photo courtesy of the OAS.

Officials in St. Kitts and Nevis highlight the future of museums in The Federation