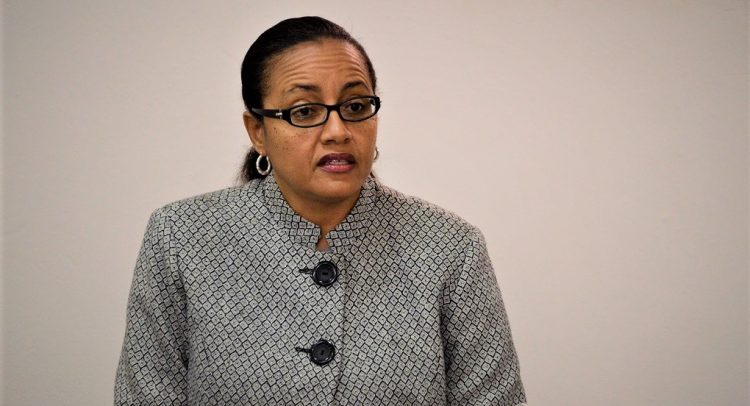 Fellow Citizens & Residents of St. Kitts & Nevis:
“Communities Make the Difference” has been chosen by the World Health Organisation (WHO) and UNAIDS as the theme for World AIDS Day 2019. St. Kitts and Nevis joins in this global observance of World AIDS Day, today, December 1, 2019 as a show of solidarity with all persons living with HIV/AIDS, and in remembrance of all those individuals whose lives were taken by the epidemic. By focusing on communities’ response to AIDS, the WHO and UNAIDS are sending the clear message that communities are powerful and positive agents for change in the lives of persons affected by AIDS. These communities are comprised of families of persons living with AIDS, health care providers and health educators, individuals who are at high risk of infection, and civil society organisations (CSOs) who have joined the fight against AIDS. Together, it is the communities’ strong response to AIDS that will make a major difference in ensuring that all persons affected by AIDS remain at the centre of the care continuum and, in so doing, will be able to live meaningful lives that are free from stigma and discrimination – two
formidable threats that have long hampered global advocacy for persons affected by the illness.

In its 2019 report dubbed Power to the People UNAIDS declares that it is a people-centred approach at the local, regional and international levels that
will bring greater focus and attention to the plight of people living with AIDS, much in the way that civil society organisations have been credited with bringing the world’s attention to AIDS when the epidemic began in the early 1980s. In short, the 100-page report illustrates that the rates of new infections are reduced and access to life-saving treatments are improved when people and communities living with and affected by HIV are engaged in decision-making and HIV services. Essentially, the document utilizes a case study approach and posits that people must have the following rights and powers:
The Power to Choose: meaning that persons who are HIV positive should be given the power to choose which prevention options will work best for
them, such as consistent and correct condom use; sterile injection equipment for intravenous drug users; and the taking of Pre-exposure Prophylaxis (PrEP).
The Power to Know: which calls for improved public education on how to prevent acquiring and transmitting HIV; knowing one’s HIV status through testing; knowing one’s viral load if that person is already HIV positive; and understanding the treatment options to safeguard one’s health and wellness.

The Power to Thrive: this speaks to the application of basic human rights, as outlined in the 1948 Universal Declaration of Human Rights. Chief among
these are the rights to health and wellness, education, gainful employment, and a decent standard of living that ensures good health and well being for human beings and those whom they are charged to care for. One of the major demonstrations of the exercise of this power to thrive is commitment to maternal and child health for HIV positive mothers and their children.

The Power to Demand: which places power into the hands of affected communities and persons so they can be fully engaged in the decision making that affects them insofar as their HIV status, testing, treatment and health education are concerned. On this score, as independent groups within communities and regions, CSOs become pivotal in advocating for those who are marginalised and without a voice, particularly where access to live-saving treatments and healthcare services are concerned. Of course, the effectiveness of many CSOs is very often constrained by budgetary restrictions brought about by shrinking donor agency funding.
All in all, Power to the People is a must-read for Governments, CSOs, healthcare providers, people living with AIDS and other key stakeholder groups in the fight against AIDS. The report calls for all concerned to be fully engaged in the empowerment of persons living with AIDS, so that more lives can be saved and the target date of 2030 to end the epidemic can be achieved.

Among other matters, World AIDS Day 2019 is meant to remind every one of us that there is an estimated 24.5 million persons with AIDS who were receiving antiretroviral therapy (ART) by mid-2019 – which is more than twice the number of persons who were on treatment seven (7) years ago i.e. in 2012. We should also be mindful of the fact that although much progress has been made towards the attainment of the 90-90-90 targets 1 for testing and treatment, there are still gaps in testing and treatment in several regions of the world. As a result, reaching the 2020 target of having 30 million people on treatment appears unlikely. The WHO has confirmed that as of the end of 2018, an estimated 79% of people living with HIV knew their status; 62% were receiving ART; and 53% had achieved HIV viral load suppression.

It is estimated that since the start of the AIDS epidemic in the early 1980s more than 32 million persons have lost their lives to the dreaded illness. By the end of 2018, some 37.9 million people were living with HIV. In the same year – 2018 – some 770,000 persons would have died from AIDS-related illnesses while another 1.7 million people would have been newly infected. Since, as I said earlier, that some 24.5 million people were accessing ART by June 2019, it is imperative we all do everything in our power to ensure that all infected persons receive life-saving treatment after confirmation of their status through testing. Moreover, testing is particularly important for those groups most at risk of contracting HIV. These include men having sex with men, intravenous drug users, commercial sex workers and their clients, persons who are in prison and transgender individuals. It should be noted that over two thirds of all people living with HIV (or 25.7 million persons) reside in the African region. This figure continues to grow due to the increasing number of new infections occurring in key population groups such as those I listed earlier. As I would have noted in the 2018 World AIDS Day Address, every possible effort must be made to address the stigma, discrimination, abuse or social exclusion that might be experienced by the most vulnerable groups of persons who are HIV positive. We must ALL do our part, individually and collectively, to shatter the ignorance that still surrounds the issue of HIV and AIDS. The message must also be sent that HIV/ AIDS does not discriminate – only people do! We must be cognizant of the fact that an HIV diagnosis does not respect either gender, age, race, social and economic status, or where we happen to live in the World.

Fellow Citizens and Residents: I could not complete this address without sharing with you our own national statistics as they relate to HIV/ AIDS. Here is the latest data on hand from the Health Promotion Unit with the Federal Ministry of Health:
1) As of November 30, 2019, there were 12 new cases diagnosed, of which only 5 cases are on ART. It should also be noted that 6 of these cases are in the age range of 20-29 years.
2) The present, estimated number of persons in St. Kitts and Nevis living with HIV, and are aware of their status, stands at 172, which represents 88% of the estimated population of persons living with HIV.

3) A total of 82 – or 49% of persons diagnosed with HIV are presently known to be on ART. The public must be reminded that ART is available free of charge and the Federation’s public health system does not deny care to anyone, regardless of their medical condition. Yet, some of the challenges observed by the Ministry of Health include the following: people often missing their medical appointments; followup being at times inconsistent; and some individuals harbouring insecurities as a result of the stigma and discrimination practiced by others.
4) Some 49 of the 172 persons living with HIV are presently virally suppressed.
5) Healthcare services re: the prevention of HIV, Tuberculosis and Sexually Transmitted Infections are available at 19 sites in the Federation. These include health centres, hospitals and private doctors’ offices.
6) The national prevalence of HIV is higher in certain key population groups, such as men having sex with men, transgender individuals, and sex workers.
7) A total of 6 HIV-related deaths were recorded thus far for 2019. It should be noted that this figure is in line with the national, annual average of such deaths for the period 2016 to 2018.

It is evident from the preceding list of statistics that we must do much more at the national level to improve our HIV/ AIDS statistics. As such, the Ministry of Health has recently embarked on a number of initiatives to assist in this endeavour. They include:

 an increase in the number of laboratory technicians to handle testing loads;
 the recruitment of a Case Manager and additional Health Educators assigned to the National HIV/AIDS Programme;
 the roll-out of the electronic case based surveillance system; and
 the improved engagement and support of CSOs to assist with public education, reaching vulnerable groups, and increasing advocacy for those who are affected by HIV/ AIDS.

The National AIDS Secretariat, in collaboration with the Ministry of Health, has planned a number of activities in observance of World AIDS Day 2019. There were a number of activities that predated the actual global observance date of today, December 1st in order to execute early sensitization efforts and stimulate positive national conversations on our ongoing challenges with and responses to HIV/AIDS. However, here are the activities meant to be
executed on World AIDS Day and during the course of the next few days following the global observance:
1. Faith-based Organisations using Their Sunday Worship to Address Stigma & Discrimination – 1st December: A number of churches should be participating in this exercise
2. Testing Day in Independence Square – 6th December: being done under the theme “Get Your Licence” (with “licence” meaning that one would know his or her HIV status via testing.)
3. Development & Dissemination of A Condom Campaign Public Service Announcement (PSA) Video – throughout the month of December – being disseminated via social media, mobile phones and national television stations
4. Weekly Outreach Re: Education and Testing – throughout the month of December: to be done at the 11 health centres on St. Kitts.

The Government of St. Kitts and Nevis encourages everyone to participate in the various national HIV awareness programmes, testing opportunities, and other related activities for World AIDS Day 2019. The Federal Ministry of Health encourages every citizen and resident of St. Kitts and Nevis to utilise the occasion of World AIDS Day 2019 to know his/her HIV status by getting tested. The sooner this is done, the sooner treatment can begin if there is a positive diagnosis. The Ministry also salutes the hardworking healthcare workers who continue undauntedly in the task of educating the public about HIV and AIDS, the need to get tested and into care, and the imperative of avoiding unsafe sexual practices. It is only through a concerted national effort that we can, in our Federation, achieve
the 90-90-90 target while we continue with the rest of the world to work towards end AIDS by 2030. The fight is collectively ours and the struggle is
real. Let us not forget that anyone can contract HIV. Even if only one person is HIV positive it affects ALL of us. Let us also fully support our community based organisations who have a major partnership role in the fight against AIDS. In so doing, we will realise, as the 2019 theme of World AIDS Day 2019 states, “Communities Make the Difference”. Every one of us has within us the power to be a difference-maker and we have a moral obligation to make a positive impact in the lives of persons living with HIV/ AIDS. If we haven’t begun to do so already, there’s no better time to start than on this occasion of World AIDS Day 2019