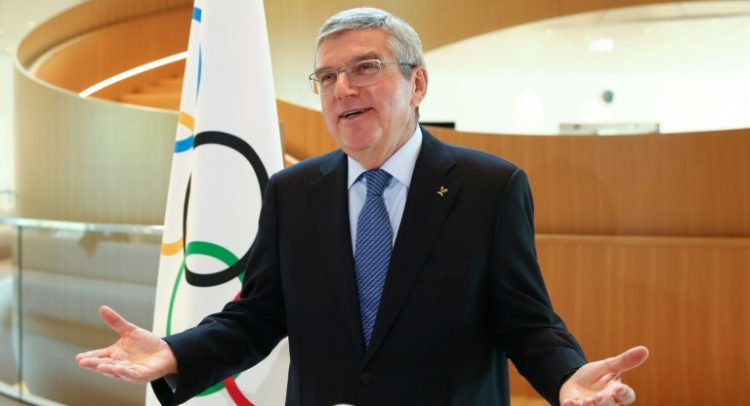 Olympic chief Thomas Bach on Wednesday refused to be drawn on athletes taking a knee in protest against racism, insisting the body representing them must explore ways they can express themselves “in a dignified way”.

Many sportspeople across the globe have made a kneeling protest to pay homage to George Floyd, a black American killed by a white US policeman in May, in an act described as anti-racist solidarity.

International Olympic Committee rules bar any “demonstration or political, religious or racial propaganda” at the Olympic Games, but the kneeling protest is sure to be a hot issue at the Tokyo Olympics, postponed by 12 months to 2021.

Bach, speaking after a videoconference meeting of the IOC’s executive board, argued that non-discrimination was one of the founding pillars of the Olympic movement.

The German said it was now the turn of the Olympic Athletes’ Commission to draw up a suitable way for athletes to act.

“We have fully supported the initiative of the Olympic Athletes’ Commission to have dialogue with their counterparts, athletes from around the world, to explore different ways on how Olympic athletes can express their support for the principles enshrined in the Olympic charter in a dignified way,” Bach said.

“We also agree at the same time with the Athletes’ Commission that we must always respect the Olympic spirit, and this means we must make a difference between such support for the principles enshrined in the Olympic charter and potentially divisive demonstrations.”

The placing of one knee on the ground was the pose made famous by former NFL quarterback Colin Kaepernick, who began kneeling during pre-game renditions of the national anthem in 2016 to protest police brutality against blacks and other minorities.

Kaepernick was ostracised by the NFL over his kneeling protest, which earned him and likeminded athletes condemnation and insults from conservatives including US President Donald Trump.

The NFL last week, however, sanctioned “peaceful protests” while world football’s governing body FIFA has called on leagues to use “common sense” when deciding whether to discipline players for displaying political messages calling for justice for Floyd.

“That is something different from a divisive issue, it is support for principles enshrined in the Olympic charter.”

Bach said he refused to interfere in the workings of the Athletes’ Commission.

“I will not pre-empt in any way these consultations the Athletes’ Commission now will have with many athletes, representatives, around the world.

“It would not be fair if I now make a statement giving directions, or even instructions, in this respect.

“The framework has been set and now let the Athletes’ Commission and let the athletes discuss among themselves and then come up with the relevant proposals.”

Bach insisted that the Athletes’ Commission was an effective tool, saying it was “taking the pulse of the opinions of the athletes and is reflecting very well the opinion of the majority of athletes”.

“Diverting opinions are a normal democratic procedure,” he added.

Photo: POOL/AFP/File / Denis Balibouse IOC president Thomas Bach refused to be drawn on the issue of athletes taking a knee