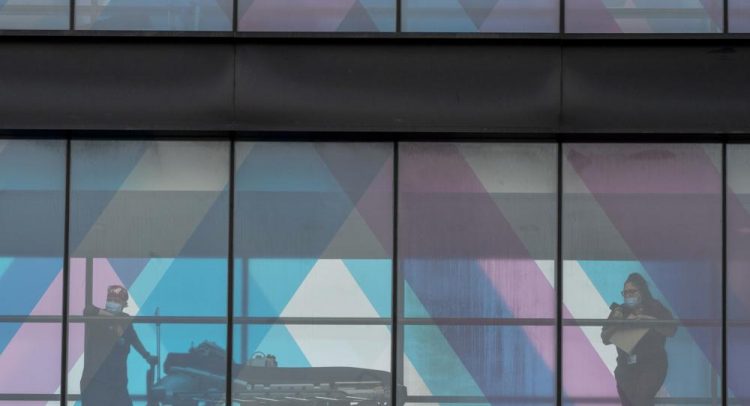 BOSTON (AP) — Staff absences for COVID-19 tripled this month in London’s hospitals, and nearly 10% of the city’s firefighters called out sick.

In New York, about 2,700 police officers were absent earlier this week — twice the number who are ill on an average day. And on Cape Cod in Massachusetts, grocery worker Judy Snarsky says she’s stretched to her limit, working 50 hours a week and doing extra tasks because her supermarket has around 100 workers when it should have closer to 150.

“We don’t have enough hands. Everybody is working as much as they physically and mentally can,” the 59-year-old in Mashpee said. “Some of us have been going like a freight train.”

The worldwide surge in coronavirus cases driven by the new omicron variant is the latest blow to hospitals, police departments, supermarkets and other critical operations struggling to maintain a full contingent of front-line workers as the pandemic enters its third year.

Governments have taken steps to stem the bleeding across a range of jobs considered essential for society, from truckers and janitors to child care providers and train conductors. But nurses and other workers worry that continued staffing woes will put the public at greater risk and increase burnout and fatigue among their ranks.

Seattle Officer Mike Solan, who leads his city’s police union, said his department is down about 300 officers from its usual force of 1,350.

“It’s difficult for our community because they’re waiting for that call for help,” he said. “And then we’re at risk because we don’t have the proper safe numbers to have a safe working environment when we answer that call for help.”

Michelle Gonzalez, a nurse at New York’s Montefiore Medical Center in the Bronx, said she and her intensive care unit colleagues never truly had a break from COVID-19, and the arrival of omicron has only reawakened her post-traumatic stress.

“Prior to work, I get really bad anxiety,” she said. “If I’ve been off for two days, I will come back in a panic because I don’t know what I’m walking into.”

Countries including Spain and the U.K. have reduced the length of COVID-19 quarantines to ease staffing shortages by letting people return to work sooner after testing positive or being exposed to the virus. The U.S. did similar for health care workers only.

Meanwhile in the U.S., states such as Massachusetts have called in hundreds of National Guard members to help fill the gaps in hospitals and nursing homes, where they serve meals, transport patients and do other nonclinical work.

In Seattle, Mayor Jenny Durkan has promised to veto legislation repealing a $4-an-hour hazard pay raise for grocery workers, which has been in place for nearly a year in some major West Coast cities, including Los Angeles and Berkeley and Long Beach, California.

“Now is not the time to roll back the pay for these critical front-line workers,” the Democratic mayor said earlier this week.

For example, there are 1,500 nursing vacancies in New York’s three largest hospitals alone, or about double the number at the onset of the pandemic, said Carl Ginsberg, a spokesman for the 42,000-member New York State Nurses Association.

“There are not enough nurses to do the job right, and so there are situations where the units have dangerous conditions, where patients are in jeopardy,” he said.

In London, the U.K.’s omicron epicenter, a wave of staff absences is hitting hospitals just as COVID-19 admissions have doubled in three weeks. The latest surge will probably persist until mid-January, officials said.

“It wouldn’t take much to cause a crisis,” said David Oliver, a consultant physician at a hospital in southeast England.

The operators of U.S. nursing homes, which were crippled by some of the deadliest COVID-19 outbreaks early in the pandemic, are among those pleading for officials to do more.

While cases in long-term care facilities have not risen sharply yet, the industry is bracing for omicron with 15% fewer workers today than when the pandemic began, said Rachel Reeves, a spokesperson for the American Health Care Association and the ​National Center for Assisted Living, an industry trade group.

Nursing homes historically struggle to compete with other health care operators because their pay rates are effectively fixed by the government, she said, so providers hope President Joe Biden’s administration can boost Medicaid funding and create staff recruitment and retention programs.

“Caregivers are burned out,” Reeves said. “Not only have many experienced tremendous loss, it has been exhausting — physically and emotionally — battling this virus day in and day out.”

In West Virginia, Gov. Jim Justice said Tuesday that his administration will use $48 million of the state’s remaining CARES Act money on recruiting and training nurses to meet a goal of adding more than 2,000 new nurses over the next four years.

Ed Bastian, CEO of Delta Air Lines, was among those who have called on the Biden administration to cut recommended COVID-19 quarantine times down to five days, or risk further disruptions in air travel. Delta, United and Lufthansa have canceled dozens of flights over the Christmas period as illnesses take a toll on flight crews.

In the U.K., train company LNER said this week that it’s canceling 16 trains a day until Christmas Eve. Transport for London, which operates the subway and employs about 28,000 people, also warned of slowdowns because 500 front-line staff are off work because of COVID-19-related illness.

Even small businesses such as restaurants and nail salons, which are not necessarily considered essential, are preparing to further curtail hours, or briefly shut down if worker shortages worsen.

Manhattan restaurateur Bret Csencsitz said the labor shortage prompted him to reduce seating and eliminate staples such as burgers and oysters from the menu at Gotham, which reopened last month.

In Washington, D.C., DogMa Daycare & Boarding For Dogs said this week that it was canceling all day care until Jan. 3 because several staff members tested positive for COVID-19.

Daniel Schneider, a Harvard professor focused on low-income workers, said the public should keep in mind that essential workers simply don’t have the luxury of working from home, as some Americans do.

“White-collar workers need to appreciate the real risks that these folks take,” he said. “You can’t ring up groceries from home. You can’t stock shelves from home.”

FILE – Health care workers watch a rally by NYSNA nurses from NY Presbyterian and Mount Sinai from an overpass at Mount Sinai Hospital, Tuesday, March 16, 2021, in New York. The worldwide surge in coronavirus cases driven by the new omicron variant is the latest blow to already strained hospitals, nursing homes, police departments and supermarkets struggling to maintain a full contingent of nurses, police officers and other essential workers as the pandemic enters its third year. (AP Photo/Mary Altaffer, File)