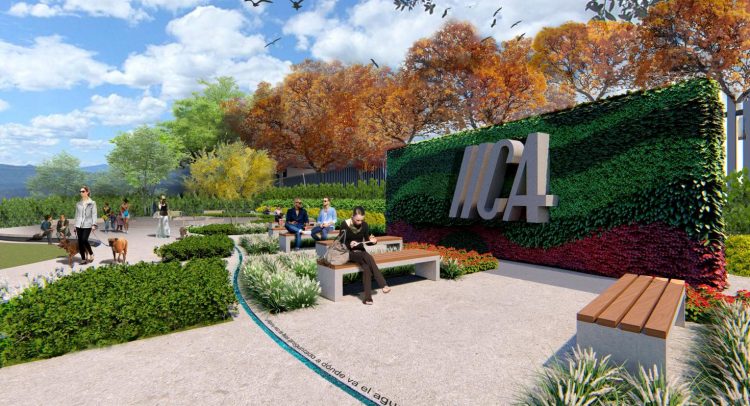 On its 79th anniversary, IICA breaks ground on the Plaza of Agriculture of the Americas

San Jose, 11 October 2021 (IICA). San José, the capital of Costa Rica and home of the headquarters of the Inter-American Institute for Cooperation on Agriculture (IICA), will have a new public space in an urban setting that will promote biodiversity, responsible management of natural resources, agriculture’s transformative potential and the contribution of rural dwellers to sustainable development.

The foundation stone of the new Plaza of Agriculture of the Americas, which will be located adjacent to IICA Headquarters, was laid by the Director General of the Institute, Manuel Otero; Costa Rican Minister of Foreign Affairs Rodolfo Solano; Minister of Agriculture Renato Alvarado; and the Mayor of the municipality of Vázquez de Coronado, Rolando Méndez. Ambassadors of Latin American and Caribbean diplomatic missions accredited to the country were also in attendance.

The initiative was launched during the celebration of IICA’s 79th anniversary, in keeping with the concept of an “IICA with open doors”—the cornerstone of a profound institutional transformation process undertaken by the Inter-American System’s specialized agency for agricultural and rural development.

“The future plaza will symbolize an IICA that is open to and tied to the community, adequately reflecting the valuable work carried out by farmers and fostering closer ties between society and the agriculture sector, which is more than necessary and can contribute to generating greater awareness of the fact that the fruits of the earth do not just spontaneously appear in supermarkets. Behind these fruits there are farmers–women and men, youth, an entire sector–that has always, and even in the most difficult times, continued working tirelessly to provide us with continuous access to food”, stated Minister Solano at the ceremony.

The Plaza is one of several initiatives launched in recent months by the hemispheric agency, including the Interpretive Center for Tomorrow’s Agriculture (CIMAG); the Fab Lab, an agricultural innovation laboratory; the Typical Rural House, which is reminiscent of rural traditions in our hemisphere; the Forest of the Americas; the mural of agriculture and urban art; and the AgroArt virtual art museum.

“IICA is increasingly opening its doors, interacting with the community, because IICA works with all stakeholders. The Plaza celebrates biodiversity as a fundamental pillar in our lives. It will implement symbolism for water, a critical resource for the future of our planet, and will convey the idea that agriculture is a strategic axis for our planet’s sustainable development. It is agriculture, its people and its rural areas that will define the sustainable development of our planet”, stated Manuel Otero at the ceremony.

The Minister of Agriculture of Costa Rica underscored IICA’s work and dedication in “giving agriculture the place it deserves once again” and called for eradicating the erroneous view of the agriculture sector “as a problem rather than a solution, as a mechanism for developing our economies”.

“Society is rooted in agriculture. We will continue needing food to feed ourselves, and only through agriculture, through our farmers, will we be able to continue feeding humanity”, stated Alvarado.

In turn, the Mayor of the municipality of Vázquez de Coronado stated that “the people of Coronado feel very proud that this Plaza will be built on what used to be a fence and border, and which will now become a meeting place for the community, for those who visit the canton and IICA. It will provide a space for public gatherings that will primarily highlight the importance of agriculture as a key source of food for the population”.

The plaza will include parks and gardens, covering an area of 455 square meters. It will accommodate more than 230 people, in a surrounding of green spaces. It will also have a 75 linear meter water trail, which will be representative of a watershed.

It will also feature planting beds representing the varied topography of the countries of the Americas, with designs symbolizing rectangular, flat and orderly, as well as curved and terraced farms. Vegetation will also be representative of the countries.

German companies urge next government to step up on climate