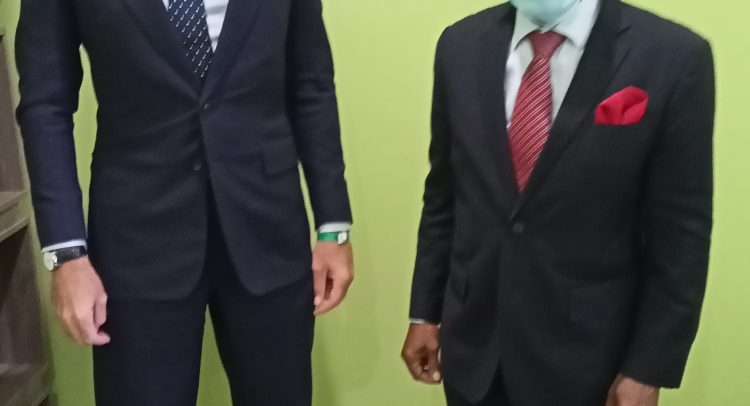 The Barbados-based British High Commissioner to the Federation of St Kitts and Nevis, His Excellency Mr. Scott Furssedonn-Wood, paid a courtesy call on the Leader of the Opposition in the St Kitts and Nevis National Assembly, The Right Hon. Dr Denzil L. Douglas on Monday.

Dr Douglas welcomed the new British diplomat to the federation. Mr Furssendonn-Wood was on his first in-person visit since his appointment in April last year.

The High Commissioner and Dr Douglas in their opening welcome remarks spoke of the relationship between the United Kingdom and St Kitts and Nevis.In their discussions both officials spoke of the economic and financial challenges not St Kitts and Nevis and the United Kingdom face, but also the global impact caused by the ongoing coronavirus pandemic.

The St Kitts and Nevis Citizenship By Investment program was also discussed and other areas of the economy were discussed.On the political developments of St Kitts and Nevis, Dr Douglas brought to the attention of the British diplomat several matters.

These included the holding of general elections during the State of Emergency in which the opposition and the electorate where subjected to lockdowns and curfews while candidates of the incumbent coalition parties were able to move around freely, irregularities in the conduct of the June 5, 2020 general elections, issues in the Electoral Office and the withdrawal of invitations by the government to credible Election Observer Missions from the Organization of American States (OAS) and The Commonwealth to monitor the elections.

The need for the establishment of new boundaries for the next election constitutionally due in 2025 was also the subject of discussions.Dr Douglas also informed the British diplomat of the attempts by his St Kitts-Nevis Labour Government while in office to change the boundaries to make them more equal in accordance with the constitution and that those attempts were thwarted by court challenges by opposition parties.

Dr Douglas also raised the refusal of the Team Unity Government to establish the Public Accounts Committee (PAC) which should have been appointed following the first sitting of the St Kitts and Nevis National Assembly in July 2020.