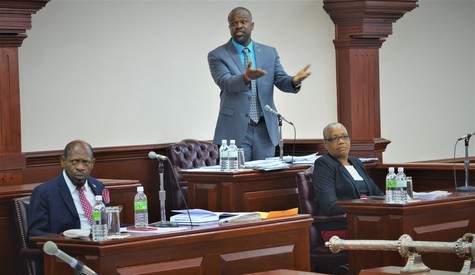 Opposition MP accuses controversial Speaker Perkins of not addressing illegal actions; calls on constituents to walk him to parliament 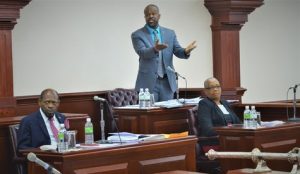 Opposition MP accuses controversial Speaker Perkins of not addressing illegal actions; calls on constituents to walk him to parliament
Basseterre, St. Kitts, February 21, 2018 – Opposition parliamentarian, Hon. Konris Maynard, called on his constituents to accompany him to Wednesday afternoon’s sitting of the St. Kitts and Nevis National Assembly after the controversial Speaker Michael Perkins, refused to address the illegality of his actions and denied Maynard’s request to withdraw the ten-day suspension on the grounds that it was “unlawful and invalid.”
Responding to his February 15 letter, the controversial Speaker informed Maynard that “having reflected soberly on your conduct during the sitting of the National Assembly on February 13, 2018, I am entirely persuaded that your conduct during that sitting was undignified, dishonourable and calculated by you to bring the National Assembly into disrepute. I therefore stand by my ruling that your conduct warranted your suspension from the National Assembly.”
Mr. Maynard, who has vehemently denied that his conducted himself disorderly, told hundreds of persons attending the meeting or listening and viewing the proceedings via social media, that the controversial Speaker “did not address a single concern that I wrote to him about the illegality of his actions.”
He said of instead of acknowledging that he has erred, Speaker Perkins lacked the testicular fortitude to admit it.”
“That is why I want to know whether you are willing to escort me to the National Assembly Wednesday as I am of the firm view that the Speakers’ actions are illegal, and a willfull attempt to try and silence the opposition and in particular, your Parliamentary Representative, Konris Maynard.”
He accused the government of wanting to replace him with a puppet of the regime. “I am not going to allow that to happen. It is time for us to put on our shoes, the time for writing is over. When you write and you cannot even get at least a reasonable response from someone who holds a significant position in the society, the writing is clearly not enough,” said Maynard.
He urged the people to protect the nation’s democracy “that our forefathers fought so hard, that persons just hundreds of feet from here in Buckley’s Estate to liberate the people of St. Kitts and Nevis from the oppressive positions, oppressive housing, oppressive situations that they were in and we cannot allow for a single man to trodden on our democracy like that.”
The Labour MP was suspended when he and the other opposition MPs were walking out of parliament following Speaker Perkins’ refusal to allow three other opposition parliamentarians to speak on the lone bill being debated.
He noted that his haste to get the opposition MPs out of Parliament, Speaker Perkins “forgot to utilise the rules that are before him.”
Maynard noted that in his handing down the decision to suspend him for 10 days last week, Speaker Perkins referred to an earlier suspension.
“There is no record of the House documenting a previous five-day suspension. There is none. The one the Speaker referred to is on Wednesday 11th July 2017, where he tried to suspend, but effectively only asked me to withdraw,” said Maynard who pointed to the Minutes approved by the Parliament which states: ‘The Speaker then considered the Hon. Maynard continues to disrupt the proceedings from his seat and at that time the Hon. Speaker named the Hon. Maynard under Section 49 (2) and directed him to withdraw immediately from the Assembly for the rest of the day’s sitting.’
“There is no record in the National Assembly where I have been duly suspended for five days at all. There was no vote. The record shows that i was never duly suspended for five days. I will fight it,” declared Maynard.