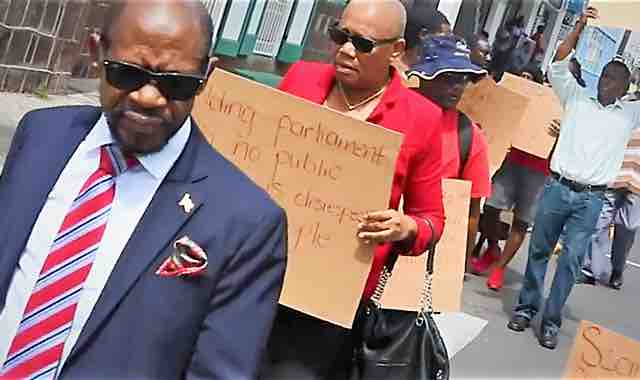 Basseterre, St. Kitts, 21st February, 2018 (MyVueNews.com) – Opposition Members of Parliament (MPs) staged a protest in front of Government Headquarters today, 21st February, directed toward the Speaker of the National Assembly of St. Kitts & Nevis, for rulings he made against them.

While the Team Unity Government was having its third anniversary sitting of the Assembly, opposition members, with placards in hand, were condemning Speaker Michael Perkins for what they believe is the unlawful suspension of MP Konris Maynard, and for what they say is anti-democratic behaviour of the Speaker targeting members on the opposition benches.

MP Maynard told MyVueNews.com that he had written to Speaker Perkins indicating that he did not follow the required procedures necessary to suspend an elected MP from parliament. Maynard also disputes the Speaker’s reference to a previous suspension of five days, and as a consequence, a 10-day suspension was ruled by the Speaker.

Maynard contends, however, that the Speaker is wrong on his stance and has been breaking the rules that govern the operations of the National Assembly.

Maynard informed, also, that the Speaker wrote in response to his letter that he (the Speaker) stood by his decisions.

Referencing previous suspensions indicated by the Speaker in his decision to rule a 10-day suspension, Maynard said, “I have never been duly suspended from the services of the parliament for five days, and so, his ruling was not only unlawful, it was in violation of the standing orders.”

At a town hall meeting called for Tuesday, 20th February, Maynard said supporters of the Labour Party were properly informed about what was taking place in the parliament.

“That members were prohibited from speaking; that a wilful and unlawful suspension was done for me, as representative of St. Christopher #3,” Maynard explained.

He continued on the Speaker’s response, “He did not address the procedural issues that I raised, meaning that there was no vote, so I cannot be duly suspended without the house having a vote, and also, that he is standing by his position.”

Today, 21st February, the Speaker, Maynard said, turned down a request to meet with him to clarify a matter on the suspension.

According to Maynard, today’s protest was the first in what will be a number of steps taken to ensure that democracy is preserved in St. Kitts and Nevis, and in particular, parliamentary democracy.