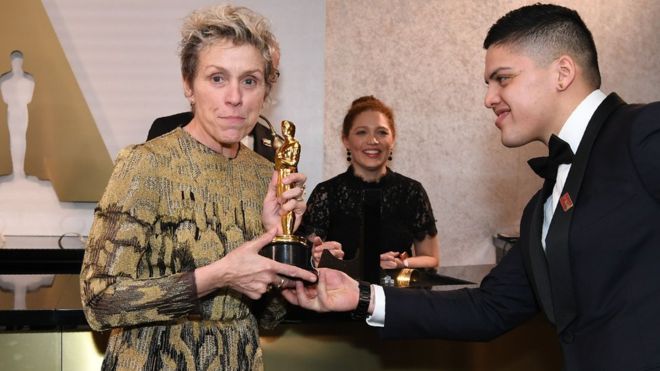 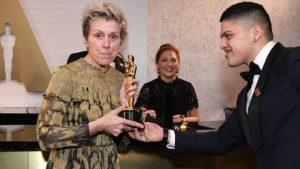 A man has been arrested on suspicion of stealing Frances McDormand’s Oscar after the awards ceremony on Sunday.

Los Angeles Police have confirmed Terry Bryant was arrested for grand theft, after the statuette went missing from the Governor’s Ball.

The statue has since been returned to the best actress winner.

A representative for the actress told USA Today: “Fran and Oscar are happily reunited and are enjoying an In-N-Out burger together”.

LAPD said Bryant was a ticket holder for the Governor’s Ball, which is the official formal dinner after the ceremony.

McDormand had already had her name engraved on the statue at the ball before it went missing.

The actress was celebrating her win of the award for best actress for her role in Three Billboards Outside Ebbing, Missouri.

McDormand received a rousing reception for her acceptance speech, as she asked all the female nominees to get to their feet.

She finished her speech with the words: “I have two words to leave you with tonight – inclusion rider.”

McDormand’s Oscar was awarded for playing a vengeance-seeking mother who is let down by the authorities after her daughter is raped and murdered.

It’s the actress’s second Oscar, 21 years after her first for Fargo.

Ayesha Curry Reveals She Has Hyperemesis From Third Pregnancy