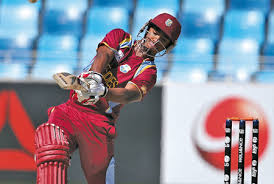 Forgotten Twenty20 International batsman Nicholas Pooran has been included in a youthful 14-man West Indies B squad which will participate in the inaugural Global T20 Canada League starting later this month.

The 22-year-old Trinidadian played three T20Is against Pakistan two years ago, but has not turned out for the regional side since. He is the only player in the squad with international experience.

Pooran has been joined by the likes of West Indies Under-19 stars Alick Athanaze and Shamar Springer, with Guyana Jaguars wicketkeeper-batsman Anthony Bramble set to lead the squad.

“With our Test and A Teams currently on tour, the Global T20 presents an opportunity for the panel to see some of our developing players in the region,” chief selector Courtney Browne said.

“The exposure and added development will assist us with identifying players with the potential to develop into international T20 cricketers.”

West Indies B will be one of six teams contesting The Global T20 Canada league, which runs from June 28 to July 15 at the Maple Leaf Cricket Club in Toronto.

The round-robin preliminary round will feature 22 matches, followed by the playoffs and final.

West Indies international stars like Chris Gayle, Kieron Pollard and Andre Russell are all down to turn out in the competition.

Director of cricket Jimmy Adams believes the tournament will be beneficial to the development of the group.

“This is a great opportunity for players and feeds into the organisation’s wider high-performance programme which looks to develop all-round skills sets of the players and officials,” the former West Indies captain noted.