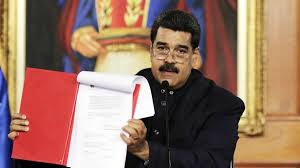 A growing roster of nations yesterday decried Venezuela’s presidential election as a farce, with the US leading the charge in announcing new financial restrictions aimed at further isolating President Nicolas Maduro’s embattled Government.

“The US will not sit idly by as Venezuela crumbles,” Vice- President Mike Pence said.

The US announcement came after a coalition of 14 nations throughout the Americas, including heavyweights like Brazil, Mexico and Colombia, pledged to scale back diplomatic relations with Venezuela and urged international organisations not to issue the Venezuelan Government any new credit unless it pertains to humanitarian aid.

Meanwhile, the nation’s fragmented Opposition vowed to unify and push for a new presidential election in the last trimester of 2018. Leaders said the Venezuelan people had delivered a silent but powerful message by largely abstaining from Sunday’s vote. The election drew the lowest participation on record for a presidential contest in decades.

“It’s evident we are the resounding majority [of], those who want a new Venezuela,” said Henrique Capriles, one of Venezuela’s most prominent Opposition leaders and who himself had been barred from running in the presidential election.

The pro-government National Election Council announced yesterday that with 98 per cent of polling stations reporting, Maduro had won more than 6.7 million votes — over four million more than his closest competitor, Henri Falcon. That makes his victory the biggest percentage-win over other candidates since Venezuela’s 1958 election after the overthrow of dictator, Marcos Perez Jimenez.“It’s the biggest victory a presidential candidate has obtained in the history of Venezuela,” Information Minister Jorge Rodriguez proclaimed.

Analysts said the president managed to win by such a wide margin — even as the country reels from an economic crisis worse than the US Great Depression and millions go hungry —as a result of both state and Opposition tactics.

Opposition leaders urged Venezuelans to stay away from the polls and refused to back Falcon. Meanwhile, the Government mobilised State workers to get to the polls and socialist party volunteers set up “Red Points” near voting centres where many hoped that by presenting their government-issued “Fatherland Card” they would get a cash bonus.

Falcon accused the Government of buying the votes of poor Venezuelans hurt by widespread food shortages and hyperinflation in what was once Latin America’s wealthiest nation, saying the election “without a doubt lacks legitimacy”.

He told supporters he’d fight on instead of joining a growing list of anti-government politicians choosing exile.

Falcon was joined in his demand for a new election by third-place finisher Javier Bertucci. A TV evangelist who handed out soup at his campaign rallies, Bertucci said he would accept the results, partly blaming what he called a mistaken opposition boycott that led to a turnout of about 46 per cent — the lowest in a presidential race in two decades of revolution.

Turnout in the three previous presidential elections averaged 79 per cent.

But Falcon said he, nonetheless, favours a new election soon and urged Maduro to do the courageous thing and desist from running. If Maduro presses forward, he warned, Venezuela will explode before his new six-year term is scheduled to begin in January.

Opposition leaders, including National Assembly President Omar Barboza, said if Maduro is sworn into office in early 2019 after his current term ends, he will have “seized power”.

A social crisis years in the making has worsened as Venezuela’s oil production — the source of almost all of its foreign income — has collapsed to the lowest level in decades, and financial sanctions by the Trump Administration have made it impossible for the Government to renegotiate its debts. More than 1 million people have fled the country in the past two years and 14,000 per cent inflation has crushed the minimum wage to less than US$2 a month.

Maduro, 55, immediately called for dialogue with his opponents and put the best face on what analysts said were disappointing results underscoring how vulnerable his hold on power remains. Despite energetic campaigning, his overall vote haul slipped by nearly one million votes from 2013, when he was first elected after his mentor Hugo Chavez’s death from cancer.

But he showed no sign of replaying Sunday’s vote.

“We will be the most powerful and largest political force in Venezuela for a long time,” he told a festive crowd of supporters who poured into the grounds of the presidential palace to celebrate. “It doesn’t faze me when they say I’m a dictator.”

He promised to spend the next two years, before scheduled congressional elections, repairing an economy he says has been badly damaged by mafias backed by Colombia and the US.

Both of Maduro’s opponents accused electoral authorities of ignoring blatant violations before the vote and on election day, like allowing the “Red Points” within 656 feet (200 metres) of voting centres. Maduro accused his opponents of trying to “demonise” a programme intended to address the social crisis and not assert political control.

Luis Emilio Rondon, the sole Opposition voice on the electoral council, backed Falcon and Bertucci’s claims of irregularities and said he too refused to recognise the results.

National Electoral Council President Tibisay Lucena acknowledged a handful of complaints, but insisted they were minor compared to past elections.

“There is only one path,” Opposition leader Maria Corina Machado said in a fiery press conference. “And that’s the route of total disobedience.”