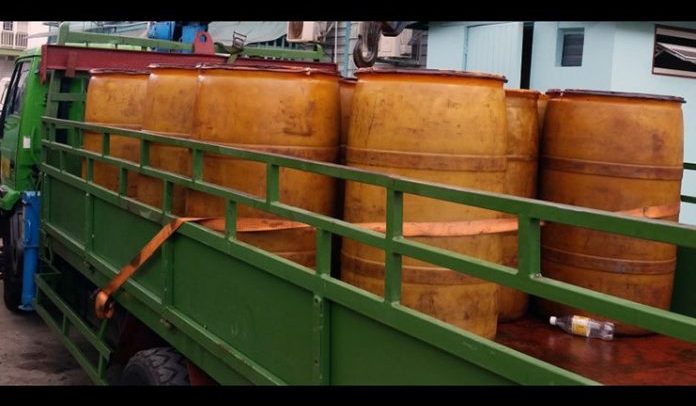 Over 9,000 gallons of illegal fuel seized in first quarte 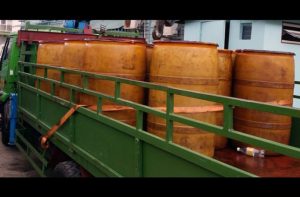 IN the first quarter of 2018, the Guyana Energy Agency (GEA) visited 3,191 sites and collected 8,339 fuel samples and seven discoveries of illegal fuel were recorded, with over 9,000 gallons of gasoline and diesel seized.

This, the agency noted, is an achievement of 22 per cent and 24 per cent respectively for its annual target.
Additionally, the GEA noted that there have been two convictions so far and three matters are ongoing before the court.

According to Public Communications Officer Taiwo Williams, in 2017 GEA’s inspectors visited 12,882 sites and collected 33,891 samples, which resulted in 29 discoveries of illegal fuel and the seizure of over 11,000 gallons of illegal gasoline and diesel.
She said this was supported by the Guyana Police Force (GPF), Guyana Defence Force Coast Guard (GDFCG) and Guyana Revenue Authority (GRA) Customs.

It should be noted, Williams said, that the percentage of sites found with significant dilution in at least one tank continues to be no more than three per cent since 2010, with two per cent being recorded in 2017.

Apart from Georgetown, it was noted that the GEA continues to operate out of bases on the Essequibo Coast, Bartica and Linden. Further, routine and intelligence-based operations continue to be done in various areas across the country as needed.

For 2017, the GEA recorded six convictions. Compensation was accepted from four individuals under GEA’s legislation in the sum of $1,237,000.

The communications officer wishes to remind all licence-holders in the business of transporting, storing, retailing, wholesaling or importing petroleum and petroleum products of their licensing obligations under the Petroleum and Petroleum Products Regulations 2014 and requirements for timely renewal, through submission of requisite documentation.
Further, she said that the obligation of conformity through the licensing process supports the GEA’s rigid stance in stamping out fuel-smuggling through proper monitoring, enforcement and compliance.

Adding that the Legal & Licensing Division of the GEA serves to execute a primary function of the agency through ‘monitoring the performance of the energy sector in Guyana, including the production, importation, distribution and utilisation of petroleum and petroleum products’ (s. 5(2)(c) GEA Act cap 56:05), Williams said this is further regulated and guided by the provisions of the Petroleum and Petroleum Products Regulations 2014, permitting the issuance of licences of the various categories.

GEA publishes annually in the Gazette, a list of all licences issued in accordance with the Petroleum and Petroleum Products Regulations. These numbers and licence holders are therefore a matter of public record.

At December 31, 2017, the following summarises the various classes of valid licences:13 Import and Importing Wholesale Licences for importation of “fuels” that is; diesel, gasoline, kerosene, and aviation fuel and 22 Import and Importing Wholesale Licences issued for the importation of either lubricants and/or LPG only. The agency noted that persons with information relating to fuel-smuggling and possession of illegal fuel can contact the agency at 226-0394 or 629 3391 to assist its efforts in combating smuggling.

On Tuesday, Commissioner-General of the Guyana Revenue Authority (GRA), Godfrey Statia, said that fuel-smuggling continues to be a problem despite efforts to thwart it. He blamed the challenges faced by his entity on the lack of sufficient resources, given the number of persons granted fuel import licences by the GEA. He alluded to a Memorandum of Understanding between the two entities to work together.

“There is no use the GEA grants an import licence and GRA doesn’t know or things are not in place for us to actually check the fuel,” Statia said, pointing to the fact that fuel exempted from taxes and destined for Mabaruma and other hinterland locations have found its way into Georgetown and some parts of the Essequibo. “We have to be extremely vigilant. It will always happen as long as there is cheap fuel at our border regions…people will always try to buy that cheap fuel and try to bring it into the country,” Statia noted.