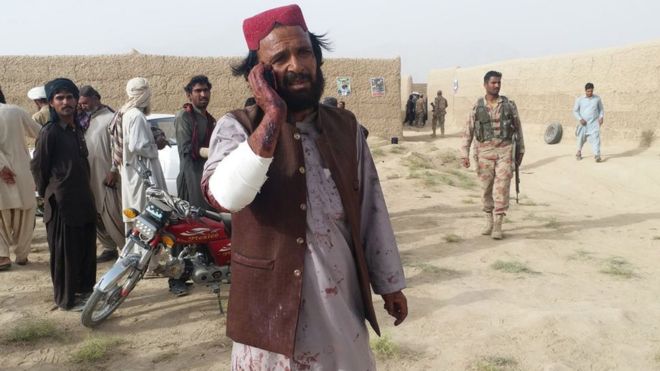 A suicide bomber has killed at least 85 people and injured about 150 in an attack on a campaign rally in south-western Pakistan, officials say.

They say a provincial candidate was among the dead in the town of Mastung.

Earlier, a bomb attack on another election-related gathering killed four people in the northern town of Bannu. There are fears of further violence ahead of general elections on 25 July.

Meanwhile, former PM Nawaz Sharif was arrested after flying home from the UK.

Sharif and his daughter Maryam were taken into custody by officials from the National Accountability Bureau (NAB) after landing in the northern city of Lahore.

The three-term PM was ousted last year after a corruption investigation. Last week he was sentenced in absentia to 10 years in prison.

He has accused Pakistan’s powerful security establishment of conspiring against him ahead of the elections.

Coming amid claims by the army that militants have been cleared from Pakistani areas, these attacks are unexpected.

Before the 2013 elections, militants had issued early warnings, resulting in a muted campaign by targeted parties.

Those same parties and groups appear to be targets again. These attacks may also trigger a new set of tensions ahead of an election already marred by controversy.

Significantly, all attacks have come in the aftermath of the conviction of former Prime Minister Nawaz Sharif by an anti-corruption court.

Friday’s attacks came just hours before Sharif flew in from the UK to Lahore, and the city is under a lockdown ordered by authorities to prevent his supporters from staging a huge welcome for him.

On Tuesday, a suicide bomber hit a campaign gathering in the northern city of Peshawar, killing 22 people – including a provincial candidate.

The Pakistani Taliban said it had carried out that attack.

Tensions across Pakistan have been rising ahead of Sharif’s return to the country.

Thousands of police officers have been deployed and shipping containers have been placed on some main roads in to block supporters from reaching the airport.

On Thursday, Sharif’s PML-N party said hundreds of activists in Lahore had been detained ahead of Sharif’s return.

Is Hummus Actually Healthy? Here's What the Experts Say