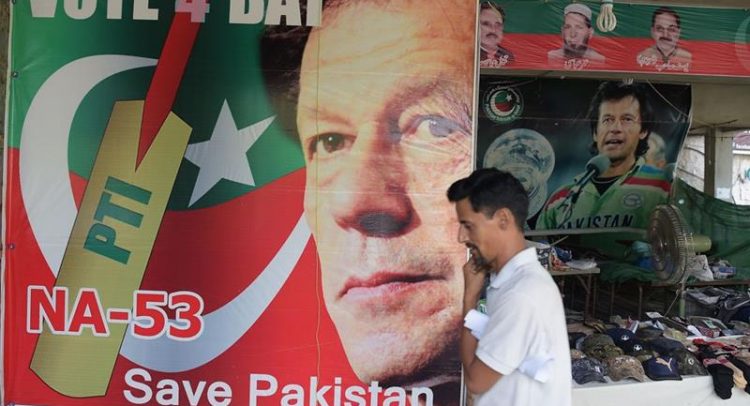 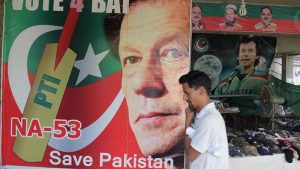 Hundreds of opposition protesters held a demonstration rejecting the results of Pakistan’s general election in the capital Islamabad, demanding an investigation into allegations of widespread irregularities during vote counting.

Imran Khan’s Pakistan Tehreek-e-Insaf (PTI) party swept a general election held on July 25, emerging as the largest single party in the country’s parliament and in two of the four provincial assemblies.

PTI will replace PML-N as Pakistan’s ruling party when members of parliament take an oath later this month.

Since election day, however, the PML-N and others have alleged widespread rigging during the vote-counting process.

“For the time begin we are demanding that a parliamentary commission be formed to investigate the allegations of rigging,” Khwaja Muhammad Asif, a PML-N leader, told Al Jazeera at the protest in Islamabad.

In his victory speech following the polls, Imran Khan said he welcomed any investigation into vote-rigging allegations and that his party would support the process.

On Tuesday, the election commission further mired the election process in controversy when it withheld a final decision on results in 26 constituencies, including nine parliamentary seats and 17 provincial seats.

The withheld results include, among others, all five constituencies where Khan himself won.

Outside the commission’s offices in Islamabad, anger was palpable among protesters.

“The election process is not complete, even now,” said Ata Ullah, 52, a PML-N supporter. “The army chief, the Supreme Court, the election commission and the National Accountability Bureau [anti-corruption watchdog] all combined to use the army to rig the elections.”

Pakistan’s military denies any role in politics but has ruled the country for roughly half of its 70-year history since independence.

Critics say it continues to exercise control over aspects of security and foreign policy, as well as censoring press coverage deemed critical or unacceptable on a wide range of topics, which increasingly include political issues.

It is rare for politicians and their supporters to directly name the military as an institution when criticising its alleged political role, for fear of reprisals.

PML-N, however, has grown increasingly strident in its criticism of the military since party chief Nawaz Sharif was first dismissed from office on corruption allegations last year and then jailed last month, two weeks before the polls.

At the protest, demonstrators chanted a common PML-N slogan during the election campaign: “Give respect to the vote!”

It was a rare show of political unity between a range of opposition parties, with rival workers side-by-side, shouting in support of PPP and PML-N – which have ruled Pakistan for decades between them.

“The issue here is that this was not an election, it was a preplanned selection,” said Khizr Khan, 53, an Awami National Party worker from the northwestern district of Swabi.

ANP leader Afrasiab Khattak told Al Jazeera his party, which won only one parliamentary seat, “wholly rejected the results” of the poll.

PTI says the opposition has so far failed to share any concrete evidence of vote rigging.

“This protest is just their attempt to stay alive in politics,” PTI spokesperson Fawad Chaudhry told Al Jazeera by telephone.

“They have failed to give us any details of rigging. They should tell us the specific constituencies and show us proper evidence of this alleged rigging, which they have failed to do even 10 days after the polls took place,” Chaudhry said.

Members of parliament are expected to take their oath early next week, with Khan likely to be elected as prime minister by the parliament shortly thereafter.

US-based group calls for investigation of Russian operatives in Guyana