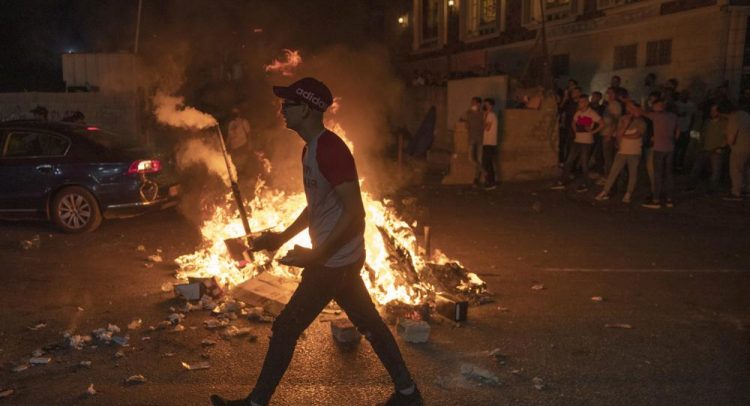 JERUSALEM (AP) — Hundreds of Palestinians protested against President Mahmoud Abbas after Friday prayers at the Al-Aqsa mosque in Jerusalem a day after an outspoken critic died in the custody of Palestinian security forces.

Nizar Banat had harshly criticized the Palestinian Authority over its corruption and misrule in a series of Facebook videos. His family says security forces raided the home where he was staying early Thursday and beat him with batons before dragging him away.

Palestinians also chanted against the PA at his funeral in Hebron, in the Israeli-occupied West Bank, and masked gunmen fired shots into the air.

Calls had circulated for protests across the territory. Late Thursday, demonstrators burned tires, blocked roads and clashed with riot police in the West Bank city of Ramallah, where the PA is headquartered.

The Palestinian Authority, which administers parts of the West Bank under agreements reached with Israel in the 1990s, faces a major crisis of legitimacy after Abbas called off the first elections in 15 years in April. Abbas was sidelined during last month’s Gaza war and his popularity has plummeted as support for Gaza’s militant Hamas rulers has grown.

His forces coordinate security with Israeli troops, targeting Hamas and other armed groups that threaten both. The policy is deeply unpopular with Palestinians, many of whom view it as collaboration with an occupying power.

“From the police to the president, the whole authority are collaborators,” a crowd of around 250 protesters chanted at Al-Aqsa after Friday prayers, as thousands of worshippers looked on. The hilltop compound is the third holiest site in Islam and a potent symbol of the Palestinian cause.

It is also the holiest site for Jews, who refer to it as the Temple Mount because it was the location of the biblical temples. It has long been the scene of Israeli-Palestinian violence, including in the runup to the Gaza war.

The U.S. State Department and the European Union’s representative to the Palestinians each called for an investigation into Banat’s death and expressed concerns about the PA’s restrictions on freedom of expression and harassment of activists.

The PA said it has formed a high-level committee to investigate Banat’s death.

The EU has provided hundreds of millions of dollars in aid to the Palestinian Authority over the years, and the U.S. and other nations have trained and equipped its security forces. The PA is seen internationally as a key partner in efforts to revive the Middle East peace process, which ground to a halt more than a decade ago.

Angry demonstrators set fires, block the streets of the city center and clash with riot police following the death of Nizar Banat, an outspoken critic of the Palestinian Authority, in the West Bank city of Ramallah, Thursday, June 24, 2021. Banat who was a candidate in parliamentary elections called off earlier this year died after Palestinian security forces arrested him and beat him with batons on Thursday, his family said. (AP Photo/Nasser Nasser)