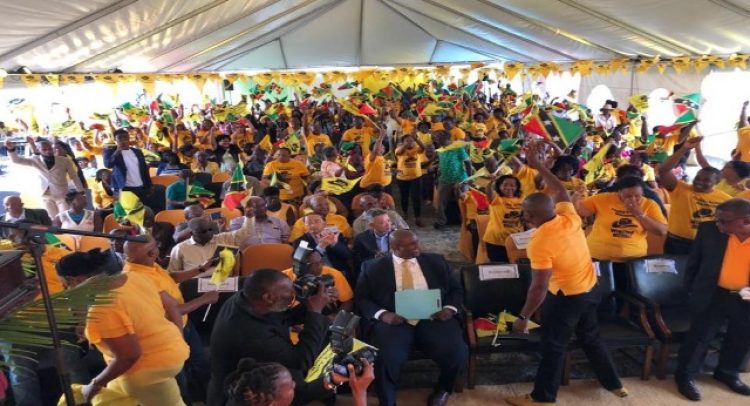 This will be the 55th Annual Convention, though the Party is  celebrating 56 years. However, due to the outbreak of COVID-19 last year, (2020), no convention was held.

The Convention is being held under the theme “Preparing Now for the future!”

Party officials said, in a press release issued on Tuesday, 6th April, 2021, that Simmonds is expected to deliver a powerful and inspiring message surrounding the theme.

They also promised that the Party is all geared up to host an event with “Energy and Vibe, Convention 55.”

Simmonds, who joined Dr. William “Billy” Herbert and others to form the Party back in 1965, once served as the Political Leader, from 1975-2000.

Other speakers who are to make appearances during the prime time, include Party Leader, Shawn Richards, who is also the Deputy Prime Minister of St. Kitts & Nevis.

He will be joined by former Leader and now one of two Deputy Political Leaders, Lindsay Grant, who holds the Tourism portfolio in the current government.

The other Deputy, Eugene Hamilton, Minister of Human Settlement & Social Security will add his voice to the list of presenters, and so too will the Chairman, Jonel Powell, who less than a year ago became the Minister of Education, Youth Sport & Culture.

The convention is slated for Sunday, 11th April, and will, for the first time, be held outside of Basseterre, at the Sandy Point Recreation Ground, starting at 3:00 p.m.

The proceedings will be chaired by General Secretary, Natasha “Shanny” Grey.

Special fraternal greetings are also to come from some of PAM’s sister parties at home in St. Kitts and Nevis and overseas.

While the convention takes place in Sandy Point, the organization’s Caucus session will be held, hours before, at their headquarters on Lockhart Street, Basseterre, during the morning period this coming Sunday.

The Caucus is where members of the New Executive will be elected and important policies and positions are adopted.

“All positions, with the exception of the General Secretary, which is an appointed position, will be up for reelection, “ said PAM in its release.

Entertainment includes performances from home grown artistes- Chioma, Melanin, and Collin Wyatt, with a special appearance from Enid Lawrence, who each year presents “us with her exquisitely beautiful Party poems,” said the press statement.

“This Convention will be one that will resonate and be talked about for years to come. The LARGEST, STRONGEST, FEARLESS Political party, PAM has set the stage for a Convention like no other, one that you will always remember,” they added.

They said that the 55th National Convention will be streamed live on PAM’s Facebook Page and Youtube Channel and carried live on WINNFM and Freedom Radio.

Main Photo at top: Scenes from a previous PAM convention with the arrival of its leader, Shawn Richards

Governor-General of St. Kitts and Nevis expresses sympathy to government and people of Taiwan on fatal train crash