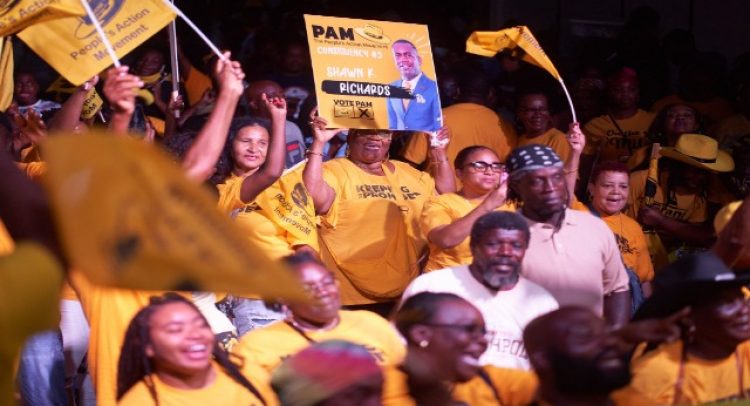 The People’s Action Movement, PAM, in a recent statement released to the media, has rejected the assumptions made by one Caribbean pollster, regarding the possible outcome of the 5th August elections in St. Kitts & Nevis.

In those assumptions, Peter Wickham of Barbados suggested that the upcoming poll would be a direct fight between two labour parties. However, PAM has questioned Wickham’s findings, indicating that it would not be the first time that the Barbadian has grossly miscalculated the outcomes of regional elections. PAM, however, did not directly name Wickham in its release, but it also left no doubt about whose comments it was targeting.

“For example, on the 29th of July 2021, that paid pundit predicted that Allen Chastanet in St. Lucia would have won the poll, only to awake the next morning to discover that Chastanet had suffered one of the worst defeats in recent St.Lucian politics,” stated PAM.

The release continued, “Then, just a few weeks ago, on the 23rd of June 2022, that same paid pundit,  again was woefully wrong when he predicted that Keith Mitchell in Grenada would have won, only to find out that the Prime Minister lost the government badly, and to a newcomer.”

“So at this stage my friends, I am not even sure if this paid pundit is an actual pollster or a false prophet,” said one PAM official. “Any modicum of credibility he has left will be decimated when PAM/CCM restores confidence in governance and provides caring leadership to Church Street,” the statement added.

Whether Wickhams’s predictions for St. Kitts and Nevis’s poll are wrong or right, would only be known on 6th August, 2022, but some political observers do believe that he cannot afford to be wrong for a third consecutive time, because of the consequences for future election forecasts.

“With PAM gaining momentum and being the leading contender, the attacks against its leaders and candidates have been mounting, and with the paid help of some pundits…,” said the PAM release.

PAM said, “In examining that pundit’s recent tainted record, the inaccuracies in his predictions were glaring, misleading, and seemingly not in tune with the reality that was on the ground in those countries, (Grenada and St.Lucia).

The Party said that it remains very confident that after the next General Elections…it will form the next government of St. Kitts & Nevis, along with the Concerned Citizens Movement, CCM, which is based in Nevis.

“Perhaps the strongest message that the Party has been receiving from voters, as candidates undertake their canvassing, is that the alliance of PAM & CCM appears to be the Best Hope for the Future of St. Kitts & Nevis,” added the statement, released on Friday, 22nd July, 2022.

The Party also revealed that “Voters have expressed their satisfaction with the positive style of campaigning that PAM has undertaken as their candidates focus on the programs and policies that will guide their vision for the country.”

PAM explained that their confidence in victory is not only influenced by the positive responses and interactions with voters across all 8 constituencies in St. Kitts, but also by credible scientific polling.

A PAM official stated that, in any race, no matter the type of competition, the focus is always on the top contender, and all other competitors will try different strategies to defeat the strongest contender, which in this case, PAM. The official added that his Party is therefore not surprised about the many recent attacks from the opposition forces.

But the Party said it is becoming increasingly clear that the strong and positive election campaign that is being undertaken by the People’s Action Movement is causing some politicians and their parties to turn to desperate means of personal attacks, vandalism, and now propaganda.

PAM, which held 4 seats in the last parliament, said it is still on course to retain those constituencies and will be successful in others.

“Even the newest observer of politics would understand that a new government cannot be formed without the members of the One Movement Coalition which include PAM of St. Kitts and CCM of Nevis,” concluded the release.

Featured Photo: Supporters of PAM, at Campaign Lift Off (Launch of the campaign) on 6th July, 2022 in Central Basseterre.