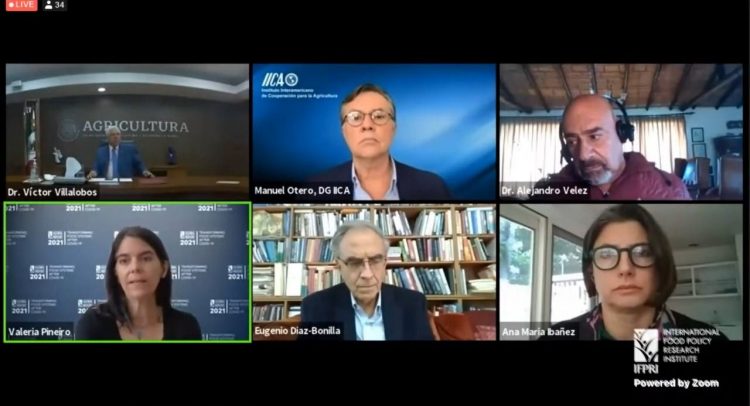 San Jose, 25 May 2021 (IICA) – The lessons learned from the Covid-19 pandemic must be heeded in order to increase the resilience of food system actors, promote the expansion and flexibility of social protection policies, and improve access to infrastructure and markets, concluded a report of the International Food Policy Research Institute (IFPRI) on the global food policy from the perspective of Latin America and the Caribbean.

The report was presented during a virtual event with the participation of Eugenio Díaz Bonilla, Head of the Latin America and Caribbean Program at IFPRI, and Valeria Piñeiro, Senior Research Coordinator. Additional panelists included Víctor Villalobos, Secretary of Agriculture and Rural Development of Mexico; Alejandro Vélez, Vice President of the Colombian Agriculture Association; Ana María Ibáñez, Principal Advisor, Vice-presidency of Sectors and Knowledge of the Inter-American Development Bank; and Manuel Otero, Director General of the Inter-American Institute for Cooperation of Agriculture (IICA).

The IFPRI is an international agricultural research center based in Washington D.C. It specializes in food policy, promotes the adoption of agricultural technologies and rural welfare, and seeks sustainable solutions to hunger and poverty.

“This is an annual report by IFPRI and this year, we focused on the effect of the pandemic and government responses. Covid-19 has hit Latin America and the Caribbean harder than the rest of the world, both in terms of health and the economy. One lesson learned is the importance of the relationship between health, food systems, and economic objectives”, stated Valeria Piñeiro.

The researcher claimed that even before the pandemic, global food systems faced serious challenges to ensure access to healthy, nutritious foods for the population as a whole.

“Two things are true: the pandemic has exposed the weaknesses and inequalities of food systems even more and some systems have been more resilient than others due to their structure and governance”.

Díaz Bonilla revealed that the region has been in trouble for decades and that historically, it has been affected by the economic cycles of raw materials. “It’s logical that Latin America would be more affected by the pandemic than other parts of the world given its high level of urbanization, which produces more direct contact among the population, and informal labor, which forces many people to keep working despite the restrictions”.

Díaz Bonilla encouraged the countries to work together to transform the agrifood sector and warned that the results would have global implications given the importance of the region as a global supplier of food and environmental services. “Latin America is not a fictitious entity. We need to work together as a region”, he said.

For Villalobos, the Covid-19 pandemic has had an unprecedented impact and the scope of its repercussions have yet to be seen. “Thanks to the farmers and producers, food is guaranteed. They are the heroes of this pandemic”, expressed the Mexican Secretary of Agriculture.

He maintained that the countries should work to produce healthier, more nutritious foods without expanding the boundaries of agriculture and by rationing natural resources, especially water and soil. “There is an urgent need to increase agricultural productivity by land unit”, he emphasized.

For his part, Manuel Otero stressed that the setback to the different economies in Latin America and the Caribbean is equivalent to a lost decade and that all the indicators of poverty, unemployment, and food security have been impacted.

“Within this context of deep crisis and recession, agriculture has acted as a cushion and a driver of growth. As compared to 2019, agrifood exports from Latin America and the Caribbean grew by 2.7% in 2020, while total exports fell by more than 9%. Additionally, a food offering was generated with the capacity to feed the 1 billion inhabitants of the Americas”.

The Director General of IICA stated that the countries of the Americas fully support the Food Systems Summit 2021 convened by the Secretary-General of the United Nations in search of more sustainable models, but advised that the voice of agriculture in the Hemisphere would be heard at the global event.

“The vision proposed by some sectors—and that we do not share—is one of a failed system in which we would practically have to start from zero. Rather, what we perceive from the Americas is that the Hemisphere’s agrifood systems are undergoing a deep transition in search of environmental, social, and economic stability”.

Otero maintained that over the last 30 years, the region’s agrifood systems have been able to significantly increase the levels of agricultural productivity and today are a driver of economic growth, job creation, and income. “I stress the importance of trade—a topic that has not been sufficiently discussed in anticipation of the Summit”, he added.

Ana María Ibáñez referred to the importance of increasing the region’s resilience to unforeseen events. “We need to work on the anticipation, prevention, and absorption not only of future pandemics, but also of other high-impact scenarios, such as climate change”, she warned.

The IDB economist pointed out that climate change could intensify migration as the environment deteriorates and poverty increases, and urged for work to focus on “increasing the resilience of producers to guarantee a stable income through the adoption of technologies that increase productivity and access to markets”.

In turn, Vélez believes the most dramatic effects of the pandemic in Latin America and the Caribbean will only be seen next year due to the decline in the population’s income. “Until now, the impact of the pandemic on food production in the region hasn’t existed or has even been positive. This was due to the circumstances and conditions, given that supplying food was a priority regardless of the restrictions on circulation.”