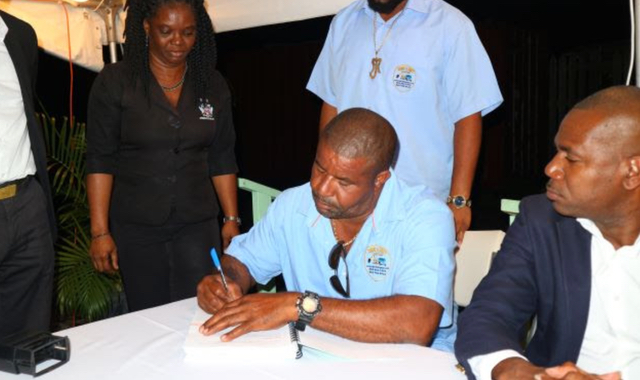 Basseterre, St. Kitts, 30th January, 2019 (MyVueNews.com) – The official signing of the contract for the EC$31 million Old Road Bay Rehabilitation Project clears the way for work to begin in resolving the problematic stretch of road.

It was on Tuesday afternoon, 29th January, that the contract was signed between Rock and Dirt Ltd and the Government of St. Kitts and Nevis.

Minister Shawn Richards, in his capacity as Acting Prime Minister, describe the discomfort that persons have with the existing road.

Acting Prime Minister Richards said, “It is certainly not easy driving on any road and wondering at any point in time if a rock is going to fall in front of you immediately. Too many persons have said they are afraid to drive across Old Road Bay especially in the evening…hence this is a project that is important to many of us who traverse this roads on a daily basis.”

In addition, the road is highly prone to damage from the sea when hurricanes pass nearby, resulting in the inability to use the road for several weeks. It also meant increased travel costs for many persons from the western side of St. Kitts, who must take the longer route to reach Basseterre.

The project was designed by ADeB Consultants Limited out of Jamaica. Its Managing Director, Martell Lee, said the chosen design will in fact eliminate the dangerous threat of fallen rocks from the hillside, as well as mitigate the hazardous effects associated with storm surges from the Caribbean Sea.

Minister of Public Infrastructure Ian Patches Liburd said Cabinet was careful in ensuring the design approved for this project would eliminate a repeat of such a situation.

Liburd said, “Our experience in 2017, with the disconnecting of this artery of the island main road, is one the people of this part of beloved St. Kitts must never have to endure again, because those who live in the area of Old Road, for about two weeks or less, had to commute some 20 miles to go to Basseterre and those coming from Basseterre as well had to do the same, drive 20 miles to get to Old Road…so we decided that this would never happen again.”

Key features of the new road include, and elevated road that is about 4.8 meters higher than the existing road and the construction of the 1.2 km road away from the hillside. It is expected the road will take about one year to be completed.

No compromise on security at ports

Legislation coming to regulate use of drones