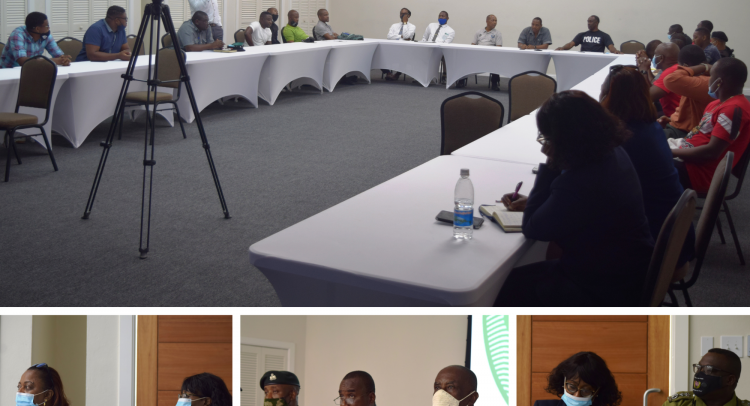 PCCU reaches out to officers from St. Vincent and The Grenadines affected by volcanic activity

Basseterre, St. Kitts, May 28, 2021 (RSCNPF): The Police Co-operative Credit Union (PCCU) Board of Directors have agreed on the type of assistance that will be offered to its members who are affected by the ongoing activity of the La Soufrière Volcano in St. Vincent and the Grenadines.

Representatives from the PCCU held a meeting with members who are Police Officers and are nationals of St. Vincent and the Grenadines to gather information on how they, their families and property were being affected by the volcanic activity.

The meeting was held at the Cuna Conference Room on May 18, 2021, and was chaired by Vice President of the PCCU Board of Directors, Erwin Williams. He was flanked by Major Kayode Sutton who is the Assistant Secretary of the Board and fellow Director, Major (Retired) Leroy Percival. The three members comprise a sub-committee established by the Board to report on what kind of assistance the Officers were in need of during this time. Mr. Williams described the event as a “fact-finding meeting” and said that the issues raised would be discussed with the other Directors.

Also present at the meeting from the Credit Union were General Manager, Mellicia Phillip, Operations Manager, Lynn Bass and Administrative Assistant, Janet Johnson. Mrs. Phillip serves as an ex-officio member to the sub-committee. She disclosed that she thought the meeting was a success and added that the Credit Union wanted to lend its support.

“It was an opportunity for the Credit Union to meet with its members who are going through a difficult time at the moment to see where we can assist them. We’re thankful to our members for taking the time out to come and engage with us as they did…I also want to thank Commissioner Brandy for allowing the Officers the time to come and have their concerns aired,” Mrs. Phillip said.

Commissioner of Police Hilroy Brandy attended the meeting as well. The Commissioner has been a member of the PCCU since its inception in 1984. He was pleased that the Credit Union was showing an interest in its members.

“I think it’s a very good gesture on the part of the Credit Union. I am happy to see the Union reach out to its members in times of difficulties and to hear from them in what ways it can assist. The Union is not duty-bound to do it, but it shows empathy on the part of the union. I hope whatever package they come up with is very helpful,” said Commissioner Brandy.

The meeting of the Board of Directors was held on May 21, 2021. The PCCU is expected to be in contact with the Officers shortly.