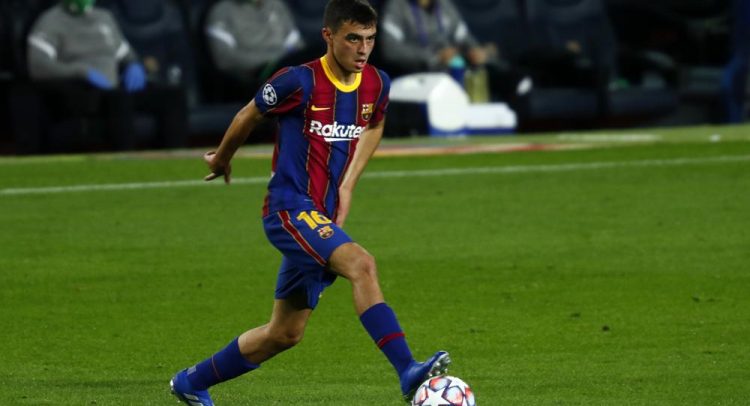 BARCELONA, Spain (AP) — Barcelona midfielder Pedri González signed a new contract through 2026 on Friday, with the club hoping the teenager can help it recover from the traumatic departure of Lionel Messi.

Pedri has been one of the very few bright spots for Barcelona over the past year, during which a president has resigned and its debt has skyrocketed. Barcelona had to let Messi walk away when it could not pay his wages. Painful losses on the field have followed.

“My desire was to remain here for many years,” the 18-year-old Pedri said after signing. “It is true that we are going through a difficult moment, but we are the greatest club in the world and we are going to work this out.”

Pedri is coming off a breakout season, his first with Barcelona after joining from Las Palmas. The playmaker led Barcelona with 53 appearances, helping it win the Copa del Rey.

Pedri also became a key player for Spain, helping the national team reach the semifinals of the European Championship and winning a silver medal at the Tokyo Olympics.

His salary was not made public but Barcelona president Joan Laporta thanked Pedri for making “an effort” to reach an agreement that the cash-strapped club could afford.

In a sign of the expectations Barcelona has placed on Pedri, his contract includes a release clause of 1 billion euros ($1.1 billion), the highest in club history. Barcelona’s director of football, Mateu Alemany, said Pedri’s release clause “means he will be off the market for several years.”

Pedri signed for Barcelona in 2019 from Las Palmas, a second-division club on his native Canary Islands. The transfer fee of 5 million euros ($5.8 million) proved a steal. At Barcelona, Pedri quickly convinced coach Ronald Koeman that he should be his central playmaker in a similar role to former great Andrés Iniesta.

Spain coach Luis Enrique took note and gave Pedri a starting spot in the European Championship, where his precision passing and ball control earned him the award for the tournament’s best young player.

With Messi gone and no money to make big signings, Pedri forms part of a youth movement at Barcelona along with forward Ansu Fati and Gavi Páez, who recently became the youngest player to debut for Spain at age 17.

Pedri is currently recovering from a left thigh injury. He said that he did not believe the injury was due to the staggering total of 74 matches he played for country and club last season.

“I am eager to get back out there and make good on the trust that (the club) has placed in me,” Pedri said.

FILE – In this Oct. 20, 2020 file photo, Barcelona’s Pedri controls the ball during the Champions League group G soccer match between FC Barcelona and Ferencvaros at the Camp Nou stadium in Barcelona. Barcelona has re-signed Pedri Gonzalez to a new contract through the 2025-26 season. The 18-year-old midfielder is one of the few bright spots in an otherwise tumultuous period for the Spanish club. (AP Photo/Joan Monfort)