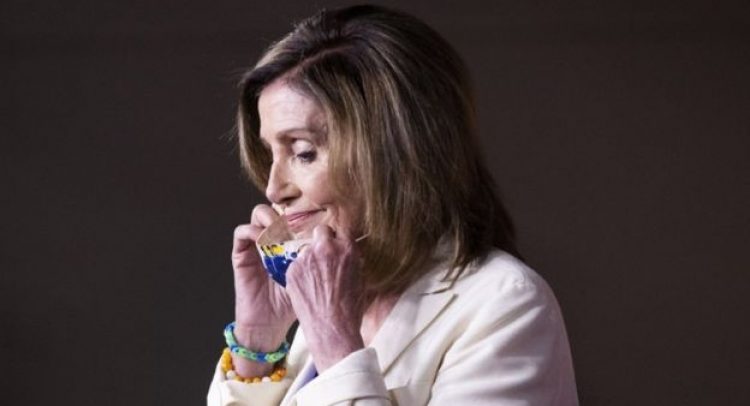 The US House of Representatives has ordered all members and staff to wear masks as the nation’s death toll from coronavirus passed 150,000.

House Speaker Nancy Pelosi warned anyone who breaks the new rule faces being removed from the chamber.

She took the decision after Louie Gohmert, a Texas Republican often seen around the Capitol without a face covering, tested positive on Wednesday.

He had been due to travel that day with US President Donald Trump.

What did the House speaker say?
Mrs Pelosi, a California Democrat, said on the House floor on Wednesday evening that members would be allowed to remove their masks when addressing the chamber.

“The chair expects all members and staff to adhere to this requirement as a sign of respect for the health, safety, and wellbeing of others present in the chamber and surrounding areas,” she said.

Mrs Pelosi said she would view “failure to wear a mask as a serious breach of decorum”, warning the House Sergeant at Arms could kick out anyone who did not wear a mask.

According to GovTrack.us, 10 members of Congress – three Democrats and seven Republicans – have confirmed they tested positive, or were diagnosed with coronavirus.

What did Louie Gohmert say?
Mr Gohmert, 66, discovered he was infected when he was routinely tested under White House travel protocol because he had been due to fly with President Trump to Texas on Wednesday.

The eighth-term lawmaker returned to his office to inform his staff in person of the positive result. He wore a mask during the meeting, according to US media.

He also gave an interview in which he pondered whether his mask was to blame for infecting him.

“I can’t help but wonder if by keeping a mask on and keeping it in place, I might have put some germs – some virus – on to the mask and breathed it in,” he told Texas station KETK.

He was one of a contingent of around two dozen Republicans often seen on the House floor without masks.

A photo on Twitter shows the two men in proximity, neither wearing masks. According to the Department of Justice, Mr Barr will be tested for Covid-19 as a result of the interaction.

Despite mixed messages early in the pandemic, public health experts now agree that wearing face coverings greatly reduces the spread of Covid-19, and is vital to controlling the infection’s spread.

Main photo: Speaker Pelosi said anyone not wearing a facemask could be removed from the House(EPA)

Russia turns on Belarus over 'odious' detention of alleged mercenaries

World No. 1 Ashleigh Barty won't play in Western & Southern Open or US Open