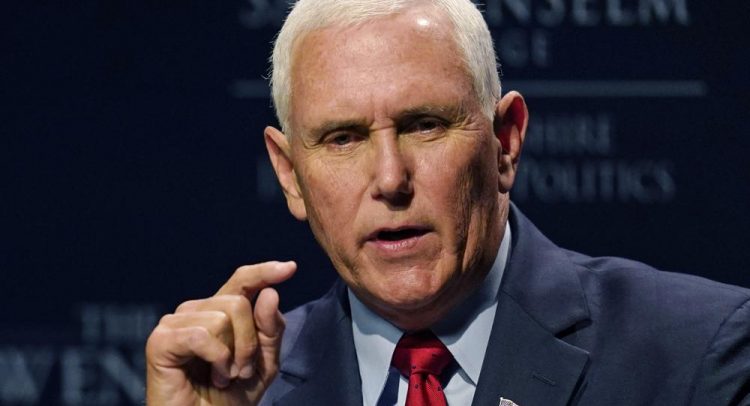 MANCHESTER, N.H. (AP) — Former Vice President Mike Pence on Wednesday implored fellow Republicans to stop lashing out at the FBI over the search of Donald Trump’s Florida home and denounced calls by some of the former president’s allies to defund the FBI, saying that was “just as wrong” as a push by Democratic activists to shift money from police.

Pence also said he would give “due consideration” if asked to testify before the House committee investigating the riot at the U.S. Capitol on Jan. 6, 2021.

His pleas for restraint come as law enforcement officials warn of an escalating number of violent threats targeting federal agents and government facilities since agents last week searched Mar-a-Lago as part of the Justice Department’s investigation into the discovery of classified White House records recovered from Trump’s estate earlier this year.

Speaking in New Hampshire, Pence was asked what went through his mind when he heard about the FBI search of Trump’s home. Pence, who like Trump is considering a 2024 presidential bid, said he has been troubled by what he called the politicization of the FBI. He also said the Justice Department and Attorney General Merrick Garland should be more forthcoming about what led authorities to conduct the search.

But Trump’s former vice president also had a message for the GOP.

“I also want to remind my fellow Republicans, we can hold the attorney general accountable for the decision he made without attacking the rank-and-file law enforcement personnel at the FBI,” he said at the Politics & Eggs event at St. Anselm College.

“The Republican Party is the party of law and order,” Pence continued. “Our party stands with the men and women who stand on the thin blue line at the federal and state and local level, and these attacks on the FBI must stop. Calls to defund the FBI are just as wrong as calls to defund the police.”

Federal authorities and private extremism monitors have warned that a growing number of ardent Trump supporters seem ready to strike back against the FBI or others who, they believe, go too far in investigating the former president.

In Ohio, a man wearing body armor and armed with an assault rifle and a nail gun was shot and killed after trying to breach the FBI’s Cincinnati office. In Pennsylvania, a man was arrested after posting death threats against agents on social media.

FBI Director Christopher Wray had said that threats to agents and the Justice Department are “deplorable and dangerous.” The FBI has warned its agents to take precautions, citing an increase in social media threats to bureau personnel and facilities. Some GOP lawmakers and others are demanding that FBI be dismantled and defunded.

Pence, who has been strategically trying to distance himself from his ex-boss, prefaced his response by saying, “Look, it’s fairly well known that President Trump and I have had our differences.” Still, Pence has been careful to frequently cite the accomplishments of the “Trump-Pence administration,” hoping that he can appeal to voters who may have supported Trump’s policies but are put off by Trump’s behavior.

Their paths diverged on Jan. 6, 2021, when a mob of angry Trump supporters stormed the Capitol in an effort to stop Congress’ formal certification of Joe Biden’s presidential victory. Trump denounced his vice president for refusing to object or delay the certification — something Pence had no power to do. A fake gallows was constructed on the National Mall, and people who broke into the Capitol chanted, “ Hang Mike Pence! Hang Mike Pence! ”

Pence had previously refused to say whether he would engage with the House committee investigating the insurrection if the panel requested his testimony. On Wednesday, he said he would consider it.

“If there was an invitation to participate, I would consider it,” Pence said, adding he would first reflect “on the unique role” he was serving as vice president.

“It would be unprecedented in history for a vice president to be summoned to testify on Capitol Hill, but as I said, I don’t want to prejudge,” he said. “If ever any formal invitation was rendered to us, we’d give it due consideration.”

WHO chief: Lack of help for Tigray crisis due to skin color