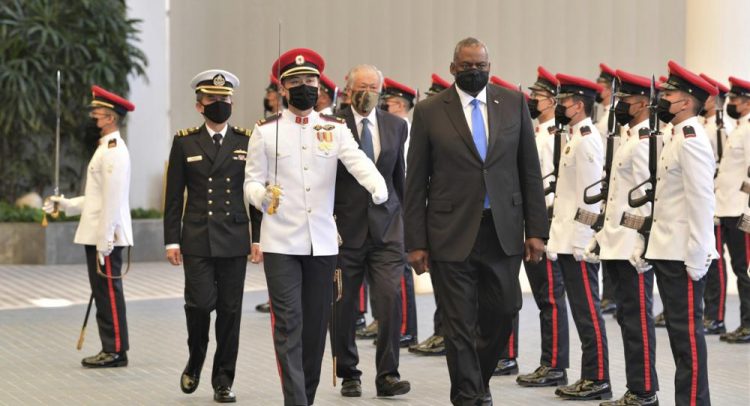 SINGAPORE (AP) — U.S. Defense Secretary Lloyd Austin decried the actions of Myanmar’s military rulers on Tuesday and urged a regional bloc to keep demanding an end to the violence.

Myanmar, also called Burma, has been wracked by violence by its security forces against people protesting against the military’s seizure of power in February.

Austin applauded the Association of Southeast Asian Nations for its efforts to solve the crisis, including a consensus reached with Myanmar’s military leader in April.

The five-point document calls for an immediate end to violence and the start of a dialogue among contending parties, with a special ASEAN envoy mediating in the talks. However, a special envoy still hasn’t been appointed.

“The Myanmar military’s refusal to respect the inalienable rights of the Burmese people and to defend their basic well-being is flatly unacceptable,” Austin said in a lecture in Singapore.

“A military exists to serve its people, not the other way around. And so we call on the Myanmar military to adhere to the ASEAN five-point consensus and to forge a lasting peace,” he added.

“ASEAN obviously plays a key role, or can play a key role. We certainly will continue to encourage ASEAN to continue to work this issue,” Austin said.

He said the U.S. will work with partners in the region to urge Myanmar’s military to “move in the right direction” and release civilians it has imprisoned.

Austin, who is on a tour of Southeast Asia, met with Singapore Prime Minister Lee Hsien Loong on Tuesday. He also met Defense Minister Ng Eng Hen to reaffirm the countries’ longstanding ties, according to a joint statement.

The retired four-star Army general hopes to strengthen relationships with other Southeast Asian allies in the coming days, and will visit Vietnam and the Philippines amid tensions in the disputed South China Sea, which is largely claimed by China.

“As Prime Minister Lee has counseled, we are not asking countries in the region to choose between the United States and China,” Austin said.

“In fact, many of our partnerships in the region are older than the People’s Republic of China itself. That’s why we are expanding our important work with countries throughout the Indo-Pacific and with ASEAN itself, a critical body that brings the region closer together, offering everyone a voice, building deeper habits of cooperation,” he said.