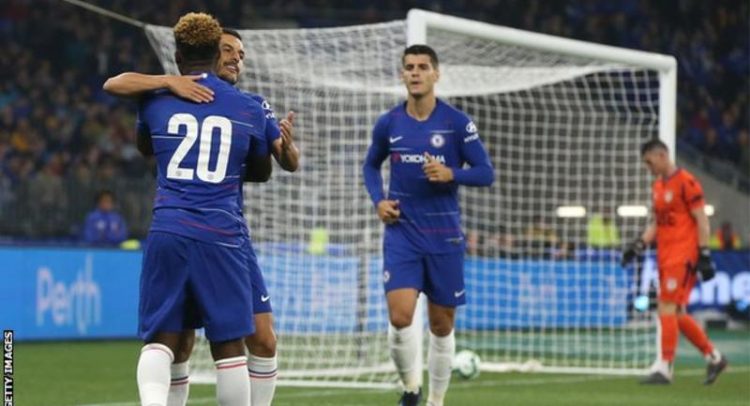 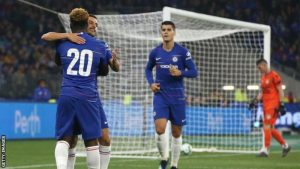 Maurizio Sarri made a winning start as Chelsea boss after Pedro’s early goal proved enough to beat Perth Glory 1-0 in a friendly in Australia.

Hudson-Odoi was one of three teenagers to start along with Polish keeper Marcin Bulka, 18, and 17-year-old Wales defender Ethan Ampadu.

Jorginho was signed from Napoli for £50m and the Italy international showed his class in Chelsea’s first pre-season game.

Ross Barkley hit a post while Cesc Fabregas, one of two players in the side along, with Marcos Alonso, who started the FA Cup final win over Manchester United on 19 May, went close with a deflected shot.

David Luiz was shown a yellow card for a late first-half challenge before Pedro had a volley saved.

Chelsea next head to France where they face Inter Milan in Nice (19:05 BST) in the International Champions Cup on Saturday before taking on Arsenal in Dublin on 1 August (20:05 BST) in the same tournament.

After meeting Manchester City in the Community Shield at Wembley on 5 August (15:00 BST), Sarri’s side host Lyon in the International Champions Cup at Stamford Bridge on 7 August (20:05 BST) before starting their Premier League campaign at Huddersfield on 11 August (15:00 BST).