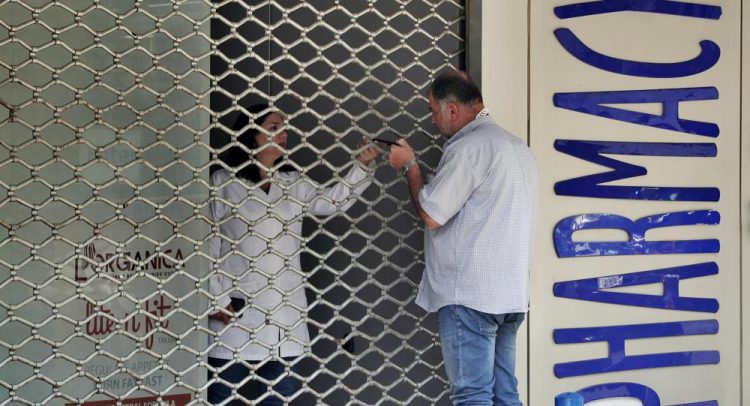 Pharmacies, gas stations close due to shortages in Lebanon

BEIRUT (AP) — Pharmacies across Lebanon shuttered their doors on Friday in protest of severe supply shortages, as motorists seeking fuel queued for hours outside petrol stations since the crack of dawn.

The two-day strike called by pharmacists over lacking medicines, gasoline and even infant milk is the latest sign of Lebanon’s economic and financial meltdown, which appears to be spinning out of control amid complete political inaction by the country’s leaders.

Entire blocks have come to a stand still around the country, causing massive traffic jams in small streets and on highways, because of queueing motorists outside of gas stations. The fuel shortages are also threatening to turn off power generators, which are the main source of electricity for most Lebanese.

Fights broke out among customers in some stations, as some insisted on filling plastic gallons. Many stations were closed, saying they had no gasoline to offer.

“The situation is unbearable,” said Rabie Alkajk, a Beirut resident who was among a group of young men who closed a main street with garbage containers and other roadblocks Friday. “Pharmacies are closed. There is no medicine, no baby milk. They are hiding it until they remove the subsidies. The gas stations are closed. There is nothing,” he shouted.

Lebanon is grappling with an unprecedented economic and financial crisis that has seen the local currency lose around 85 percent of its value since October 2019. Banks have clamp down on withdrawals and money transfers, locking people out of their savings amid soaring inflation.

With its foreign reserves drying up, the Central Bank has been saying for months that the government won’t be able to keep up subsidies, including on drugs and fuel, leading to panic-buying and hoarding at home and in warehouses. That has exacerbated the shortages.

Lebanon’s crisis is rooted in decades of corruption and mismanagement by a political class that has thrived on a sectarian-based system of patronage networks.

The country’s health care system has been among the hardest hit, with some hospitals halting elective surgeries, laboratories running out of test kits and doctors warning in recent days that they may even run out of anesthesia for operations.

On Thursday, hospitals said they may be forced to stop kidney dialysis treatment as of next week.

Pharmacists say the shortages affecting everything from chronic illness medications to pain relievers and baby formula are increasingly putting them at odds with customers and patients. They accuse distributors of hoarding products for sale later at higher prices, or on the black market.

“What should I do at home, when my son needs milk or diapers. Tell him I don’t have money to buy them for you? Even if I did have, they are all closed!” Alkajk said.

A man speaks with a pharmacist through a closed door of a pharmacy, in Beirut, Lebanon, Friday, June 11, 2021. Pharmacies across Lebanon began a two-day strike Friday, protesting severe shortages in medicinal supplies that is increasingly putting them in confrontation with customers and patients searching for medicines. The shortages are affecting everything from medicines for chronic illnesses to pain relievers to infant milk. (AP Photo/Bilal Hussein)

ECCB calls for revolution in doing business in ECCU