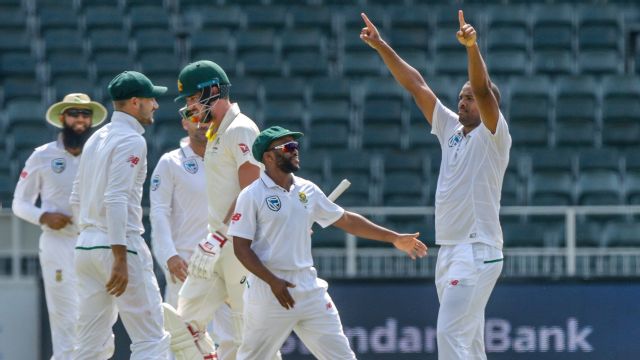 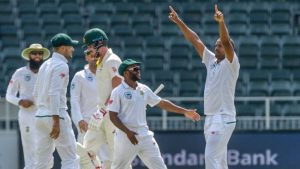 It’s always challenging for a captain to judge when his team has enough runs on the board. Turns out South Africa had enough about an hour into day two. Led by a brilliant bowling display from Vernon Philander, South Africa took less than 90 minutes on the final day in Johannesburg to wrap up victory by 492 runs, sealing their first home series win against Australia since 1970.

A series full of bad blood and boorish behaviour, collateral damage and carnage ended with the latter. Australia started the day on 88 for 3 and lost their remaining seven wickets for 31 runs inside 17 overs. Philander struck with the first ball of the day, again three deliveries later, and kept striking even more regularly and resoundingly than Big Ben. He finished with the remarkable figures of 6 for 21, and match figures of 9 for 51, and Australia were humbled for 119.

The win was sealed with the retiring Morne Morkel at the bowling crease, although the wicket was not added to his career tally of 309. Nathan Lyon drove Morkel away through cover and turned for a risky second run; Aiden Markram’s throw from the outfield was good enough for Quinton de Kock to whip the bails off and have Lyon run out for 9. Australia had made only 340 runs for the match; South Africa had that many well before lunch on day two.

It is hard to believe Australia won the first Test of this series. It seems an era ago, and in many ways it was. Since then, Australia’s captain and vice-captain have been sacked in disgrace, the coach has resigned, and Tim Paine, not even part of Tasmania’s team at the start of the summer, is now the skipper. In terms of results, Australia’s 1-0 series lead turned into a 3-1 win for South Africa, who dominated throughout the remainder of the series.

Not only was this Australia’s first series defeat in South Africa since 1970, it was also the first time since that same tour that they had gone through a series of at least four Tests without a single batsman scoring a century. Australia’s collective batting average of 22.02 was their lowest in a series of at least four Tests since the dark days of the World Series Cricket era, when an enormously weakened side averaged 19.17 in the Ashes in England.

The final-day carnage began with Philander nipping one in to Shaun Marsh, whose inside edge ricocheted off his leg and was taken in the cordon by Temba Bavuma. Three balls later, Philander added Mitchell Marsh, whose regulation edge was caught behind. Peter Handscomb soon fell to Philander in almost identical fashion to his first-innings dismissal, trying to leave but instead playing on to his stumps, this time for 24.

That was all just a warm-up for Philander, who later managed three wickets in four balls. His fine display of swing and seam bowling brought three consecutive edges from Paine – an inside edge, then an outside edge that didn’t carry to gully, and then a regulation chance to the wicketkeeper. Two balls later, Pat Cummins failed to pick the inswinger and was bowled shouldering arms to Philander, and next delivery Chadd Sayers edged to third slip.

Philander’s hat-trick ball was solidly defended by Josh Hazlewood, and the match then entered a holding pattern as Lyon and Hazlewood held off the inevitable for six overs. The only question was who would get the final wicket – Philander, to complete a ten-wicket match haul, Morkel to finish his last Test on a high, or someone else. In the end, it was a run-out, perhaps appropriately effected by Markram, who with 480 was comfortably the leading run-scorer in the series.

The final scenes of this vituperative series involved joy and disappointment, but also handshakes and congratulations, the way Test cricket should be. And, also as it should be, the best team won.

A song for Winnie