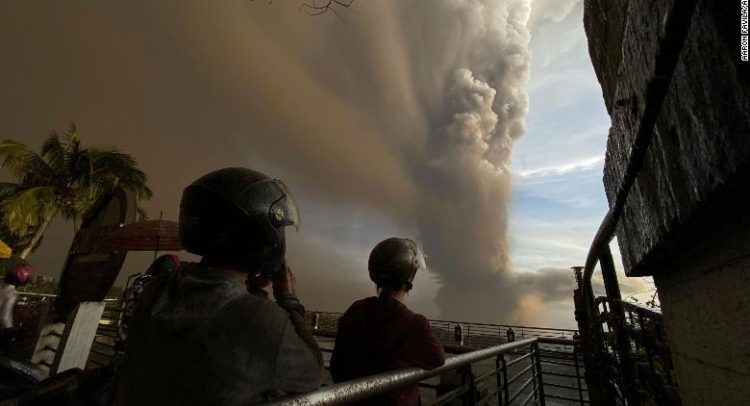 Manila, Philippines (CNN)Philippine authorities have urged a “total evacuation” of nearly half a million people near the capital Manila, after a volcano spewed ash up to nine miles (14 kilometers) into the air Sunday prompting warnings of a possible “explosive eruption.”

The Taal Volcano, about 37 miles (60 kilometers) south of the capital Manila on the island of Luzon, is one of the country’s most active. Images from the scene on Monday showed streams of lava beginning to gush out the volcanic vent, the sky above still thick and dark with ash and steam.
The Philippine Institute of Volcanology and Seismology (PHIVOLCS) has raised the alert level to four, meaning an “explosive eruption” could happen in the coming hours or days. Its highest alert level is five, indicating an eruption is taking place.

In explosive eruptions, magma is fragmented and violently expelled from the volcano — think of a soda can after being shaken — as opposed to thick lava oozing out.
Taal Volcano isn’t actually very big — but it’s considered among the world’s most dangerous, owing to the number of people that live in its immediate vicinity, said Erik Klemetti, a volcanologist at Denison University.
PHIVOLCS has requested a “total evacuation” of everyone within a 17-kilometer (10.5 miles) radius around the volcano. This area, considered a volcanic danger zone, is home to more than 450,000 residents, according to the United Nations Office for the Coordination of Humanitarian Affairs.

As of Monday, more than 16,400 people had sought shelter in temporary evacuation centers set up by the authorities. The total number of evacuees is likely to be higher, however, with many people choosing to stay with family members and relatives in other parts of the country.
Federal authorities are helping the response and evacuation operation. The army sent 20 military vehicles and 120 personnel to help affected residents, and the secretary of national defense said helicopters were on standby to evacuate people.
The defense secretary also urged residents near the eruption to evacuate, and not to hesitate in leaving their homes. Aid organizations like the Red Cross are assisting on the ground by sending rescue vehicles and supplies.

Residents within the immediate area are most at risk from the effects of a potential eruption, including a possible volcanic tsunami in the lake surrounding the volcano, according to PHIVOLCS. There are 10 cities and municipalities surrounding the volcano, some lying outside that evacuation radius — and they are home to nearly 760,000 people, PHIVOLCS said.
The lava now beginning to erupt is dangerous, Klemetti said, as it’s creating “a big lava fountain” that could then spill into nearby towns. But volcanic ash is the biggest danger, said Joseph Michalski, director of the Earth and Planetary Science division at the University of Hong Kong.
“The ash is what will kill you, not the lava,” Michalski told CNN. “The ash flow from an exploding volcano can travel hundreds of kilometers an hour.”
Other threats include deadly toxic gases emitted from the eruption, and mud flows caused by ash mixing with water vapor in the atmosphere, Michalski added.

If it erupts again, the ash — which carries microscopic shards of glass — could potentially be carried 100 kilometers (62 miles) or more, contaminating the air and water supplies in distant locations. More than 25 million people live within 100 kilometers of the volcano.
“(The shards of glass) are hazardous to lungs,” Michalski said. “You don’t want stuff like that in your lungs. It can get lodged in there and make you quite ill.”
Michalski said it’s too early to tell just how big the impending eruption could be — Taal Volcano has a long history of frequent, small eruptions. However, it’s also potentially more dangerous than other volcanoes because of its location on a lake — the interaction of magma with water can make a volcanic eruption much more explosive.
On Sunday, the volcanic ash spread as far as Quezon City north of Manila, prompting the suspension of all flights at the capital’s international airport.

Photos from the aftermath on Sunday show ash mixing with rain, creating a thick black sludge that blanketed cars, streets, and homes in some towns. Ash is even heavier than snow, meaning excessive pile-ups, especially when mixed with rain, can cause roofs to collapse.
Apart from immediate health hazards and structural damage, a potential eruption could also bring long-term consequences for the area’s economy.
The volcano is surrounded by a lake, which is a popular attraction — meaning many of the towns in the vicinity are tourism hot spots. There are several amusement parks, lakeside resorts and yacht clubs within the 17-kilometer evacuation zone.
The holiday town of Tagaytay, which lies close to the water’s edge, is a popular getaway for Manila residents who often take boats onto the lake and hike up the volcano.

The future of this tourism economy could depend on how destructive the potential second eruption is — if it’s big enough, it could wipe out the entire volcanic island in the middle of the lake, said Michalski.
It could also serve a severe blow to the many farmers and fishermen who live in the area and rely on the lake and its surrounding land for their livelihoods.
The volcano has seen powerful eruptions before — one eruption in 1754 lasted six months, and its deadliest eruption took 1,335 lives in 1911. It erupted again in 1965, killing 190 people, and continued to have four more minor eruptions in the years since.
Mariton Bornas, chief of volcano monitoring at PHIVOLCs, said that the agency had monitored tremors at the volcano as early as March 2019 — but they were surprised by the rapid speed of the eruption on Sunday.