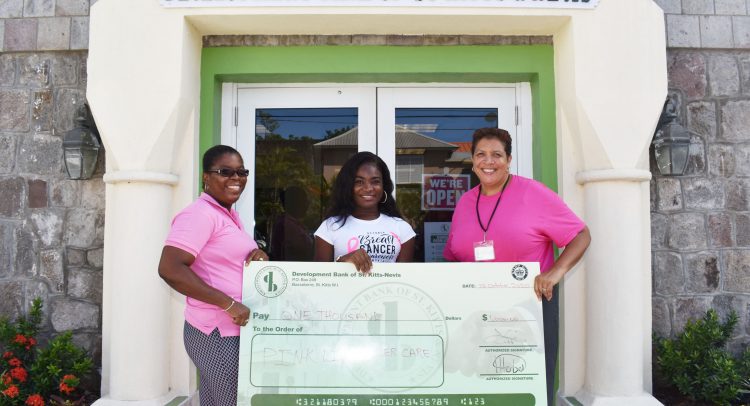 Nevis-based non-governmental organisation, Pink Lily Cancer Care Foundation, which has had most of its activities this year curtailed as a result of Covid-19 pandemic, has launched a support group that will be meeting on a monthly basis at the Alexandra Hospital in Charlestown.

“Because of Covid we haven’t done anything further up in the year, so we started in September with a breakfast sale,” said Pink Lily Cancer Care Foundation’s Cancer Support Coordinator, Mrs Cindy Freeman. “We have started a new support group for people who have passed on, who are still suffering, even the families who have people who passed on, and persons who are still suffering from cancer.”

Mrs Freeman, who made the remarks last week at the branch office of the Development Bank of St. Kitts and Nevis in Charlestown, added that the support group would be meeting every last Wednesday of the month. The first meeting was held on October 28 at the Alexandra Hospital.

“Then we had our annual walk held under the theme ‘A Walk to Remember’ which was held on Saturday the 17th October,” noted Mrs Freeman. “It was well attended and we thank everyone for their continuous support for the past years and the coming years.”

The Foundation’s Cancer Support Coordinator, who was accompanied by Pink Lily’s Chairperson and Support Coordinator, Ms Tracy Parris, added: “We thank especially Development Bank for always having our back, always supporting us for the cause because you know cancer is not like ‘I am going to come to you today’, ‘I am going to come to you tomorrow’, it does not discriminate, it does not tell you when it is coming – it just comes.”

According to Ms Parris, because of Covid-19 they did not look for sponsors for the walk this year and also did not do registration as businesses and individuals are struggling financially. All they did was to ask participants to wear any Pink Lily T-shirt they had and just walk.

“It was just to keep the walk going because we did not want to stop it, even if we did not collect the money – it was important that the walk still happened,” said Ms Parris. “We had a minute of silence for my sister, Mrs Lea Parris-Cambridge, the founder who we lost, and plus for other persons that we had lost over the years. After that we went to the beach and we had more people than those who started, so people joined as they were going on the walk.”

She added: “We did not do prizes this year, and we did not have music because we were told there were certain Covid protocols that we had to stick to, and so we just gave fruits and water, which was well received.”

The two Pink Lilly Cancer Care Foundation officials were at the Development Bank to receive the Bank’s contribution towards the foundation’s future activities. The cheque was handed over to them by the Bank’s Customer Service Representative, Ms Tywana Cranston.

“Mrs Lea Parris-Cambridge, who was born on June 12, 1969, passed away in the United Kingdom on December 1, last year,” observed Ms Cranston. “A selfless person, she started Pink Lily Care Foundation on February 9, 2008 which has established itself as an organisation that has been giving hope to thousands in Nevis and around the world. We at the Development Bank honour Mrs Lea Parris-Cambridge by supporting the work she started, and we implore others to do the same.”

The donation by the Development Bank, according to Mrs Freeman, will go towards planning of their next annual walk which will be held on Saturday October 16, 2021, on its usual route from Eva Wilkin building in Gingerland to Sunshine’s on Pinney’s Beach. The contribution will also be used to assist persons who cannot afford to pay for their whole cancer treatment and also to donate to other cancer patients.

Chairperson Ms Tracy Parris reminded that Pink Lilly’s birthday is on February 9 of each year, and for its 13th anniversary next year they are planning to having some activity probably on the weekend before or the weekend after the anniversary date.

“Pink Lilly was established in 2008, because my mum and Lea were diagnosed in 2007, but we launched it on 9th of February 2008 at the Old Manor Hotel,” said Ms Parris. “We have been going strong ever since. But we always encourage people to continue walking with us, as the walk is not for Nevisians only, it is for everybody and I would like to see persons from other cultures and other communities join us because it does not matter whether you are born Nevisian or Guyanese, it does not matter – cancer is cancer.”

Pink Lily supported the Nevis Cooperative Credit Union’s Health Walk which was held on Saturday October 24 from Oualie Beach to Charlestown, and Ms Parris noted: “That is another thing going forward – we want to join as many walks whether it is renal, whoever is having a walk because people come and support us and so it is good to support other people.”

Health officials keeping an eye on countries in CARICOM Bubble