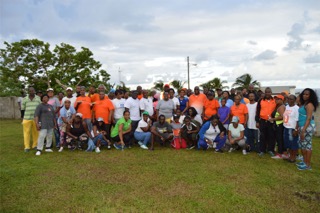 BASSETERRE, ST. KITTS, April 3, 2018 (PLP PR Media Inc.) — In existence since 2013 when it was launched, Peoples Labour Party (PLP) National Secretary Ms Myrtilla Williams is saying the party is rightly proud of its political existence and its accomplishment thus far.

“We have been a beacon in the Tripartite Team Unity political alliance with the People’s Action Movement (PAM) and the Concerned Citizens Movement (CCM),” stated Ms Williams. “It is common knowledge nationally, regionally and internationally that the Peoples Labour Party is fortunate to be blessed with a Political Leader second to none.”

The PLP’s National Secretary made the remarks on Saturday March 24 as she presented the party’s 2017-18 report at the Private Session of the PLP’s historic Second Annual National Convention held on the Patsy Allers Playing field in West Basseterre. The convention’s Public Session which had been held earlier in the day attracted over 700 participants.

“Dr Timothy Harris, Prime Minister of St. Kitts and Nevis, is a man of pioneering vision,” observed Ms Williams. “This is evident through his exemplary performance as Party Leader and as Prime Minister. Day after day he rises to the challenge and discharges his duties with dignity and accuracy not just as Prime Minister of this Federation and leader of Team Unity Alliance, but as Leader of the Peoples Labour Party.”

According to Ms Williams the Peoples Labour Party National Executive, following its sound constitutional blueprint and with an intelligent and capable team in place, the party pressed ahead through the year 2017 to 2018 adhering to its vision and delivering on its set goals.

“I am pleased to inform this convention that in keeping with the party’s guidelines, we met regularly,” she reported. “In the past year we convened over 15 times to carefully plan and brainstorm ideas, report and discuss matters important to our political office and by extension the people whom we hold in high regard and esteem.”

The meeting norms of the PLP extended beyond the National level to its Constituency Executive Groups throughout the island. She further noted that the meetings had moved beyond the walls of the party to include meetings with regular persons, whether individually, in small groups, or larger gatherings in extended communities.

“Our actions have become apparent time after time,” noted Ms Williams. “True to our core values, the Peoples Labour Party has engaged in many activities involving youth, education, sports and games, health and physical fitness, spiritual well-being, all to advance our belief in putting people first.”

Some of the major accomplishments of the Peoples Labour Party include the successful annual Help A Child Programme that provides primary school scholarship awards to students from families of lesser financial means in Constituency Number Seven. In 2017 approximately 100 students were each sponsored the sum of $500 to assist with school uniforms and supplies.

“Here in West Basseterre, Constituency Number Three, our Deputy Leader the Hon Akilah Byron-Nisbett and her team also engaged in educational support,” noted Ms Williams. “During the last school term, she directly delivered over 100 schoolbags with books and supplies to students. She delivered to these children regardless of their parents’ political alignment.”

Others mentioned were the Prime Minister’s PLP Monthly Health Walk that has since become a national event, and the regular fellowship and worship “keeping God in the midst of all that we do through prayers, fellowship and worship, remains a priority for the Peoples Labour Party. We have and will continue to worship at various churches around the island.”

Community building activities by the Peoples Labour Party include a domino league which is the longest running in the region, basketball and football leagues. And the party has taken over the hosting of the Good Friday Kite Flying Competition and Fun Day at Black Rocks which has also become a national event.

Fundraising activities were part of the Party’s community engagement and these included a fish-fry in West Basseterre, breakfast fundraisers by PLP Women Group in Constituency Number Seven, and the National Women of Power Take-away Breakfast on the Bay Front in Basseterre.

In her conclusion, PLP’s National Secretary Ms Myrtilla Williams stated that growth and development of the party were important to all of them, noting that the party continued to expand its membership throughout the island via its eight constituency executive branches and the wider diaspora.

“We have a current membership base in the region of 1000,” said Ms Williams. The Peoples Labour Party remains proud and humbled to play a leading and compelling role with our Unity Partners PAM and CCM in the political landscape of St. Kitts and Nevis; and as we move boldly into the future, a party of just three years, we remain steadfast in the understanding that our vision and determination cannot be dwarfed by our size.”

She ended by saying: “We have the synergy, we have the drive, and as we erode the opposition’s base, as we grow from strength to strength in Constituency Number Three and in every corner of this great country, we shall keep our commitment to Putting People First, Country Above Self.”

Shaw calls on J'cans to invest more in idle lands