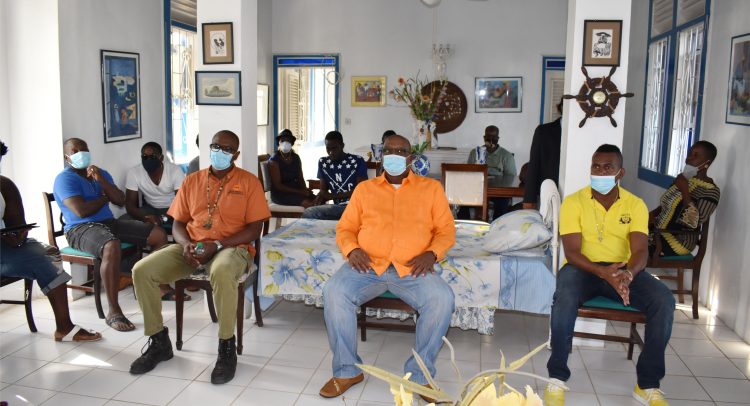 Mr Williams is the Chairman of the Peoples Labour Party Constituency Number Six Executive Branch. The ceremony which was chaired by his campaign manager Mr Calvin Leader, and was attended  by other senior PLP and PAM officials, observed social distancing and wearing of facemasks as per SR&O Number 16 of 2020, Emergency Powers (COVID-19) Regulations.

Prime Minister Harris in thanking those who turned out for the brief ceremony at very short notice informed them that history was in the making, advising that history is always being made by ordinary people who find the strength and the courage to act in their own defence.

“I have no doubt that Kevin Williams represents your leader of the future when he wins,” said Dr Harris. He added that it is now possible because unlike elections before, “Douglas has no seat, so Douglas is starting just like Ninky – he is starting as a man who has been thrown out of his seat by the Court.”

The PLP National Political Leader said the people of Constituency Number Six need a fresh start, and that they really need somebody who now appreciates where they are, and he thanked the candidate for taking the stand on his journey to bring proper representation to the people of Number Six.

“Times have changed and gone, and you now have to secure yourselves,” advised Dr Harris. “What I can promise you: Five years of Kevin Williams working in the Team Unity Government of Harris and Shawn Richards will bring more to you and to your community than has ever happened under the former regime – so you have a clear choice.”

In accepting the honour, Mr Williams expressed it was a pleasure to be selected to represent the people of St. Paul’s and Constituency Six. He observed that the people have been suffering all the time as a result of poor representation stating that they have always been taken for granted by the leadership, and that is what he is aiming to change.

“We have the right to stand up and counted and not to be counted while sitting down,” said Mr Williams. “What I want to instil in all of you young guys is to come out and come forward and to show that we have the right as any other constituents. You need proper representation – somebody who will look for you, and this is what I will bring to you guys.”

The Team Unity candidate lamented that while the constituency was for last twenty years represented by a prime minister, the constituents were never given opportunities as the leader empowered people from outside St. Paul’s and bemoaned that no permanent secretary came from St. Paul’s.

“The Unity Government has done a lot of things and will continue doing it,” said Mr Williams. “We in Constituency Six have a statement to make. It is no longer we will be fooled. It is no longer we want people to take us for granted. Let us show them that we deserve to be counted and we are going to make it count this election.”