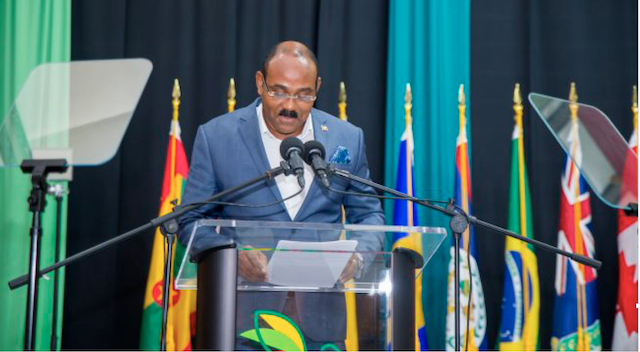 Prime Minister Gaston Browne is once again levelling strong criticism against larger countries for the role that they have played in climate change and for their de-risking practices which he said are threatening the Caribbean, and he is calling upon leaders to hold larger nations accountable.

Browne, who was speaking at the opening of the Caribbean Development Bank’s (CDB) 48th annual meeting of the board of governors in Grenada yesterday, said, “Hurricanes Irma and Maria also demonstrate the need for those who are responsible for climate change to take responsibility for the devastation they cause and to better respond, with real time and adequate financing, to address the crisis they create.”

He said governments should “never retreat” from blasting these sentiments on the world’s stage because the “very existence” of the region hangs in the balance.

Browne admonished the gathering that the best route to increasing the resilience of the region is through further tightening of the union among the countries.

Meanwhile, Grenada’s Prime Minister, Dr. Keith Mitchell, cautioned that disasters and other hazards associated with climate change are creating a new normal in the region that will require a change in how governments approach development.

“They deny us the right to compete in financial services, particularly in differentiated taxation to attract investments,” Browne added.

He said these countries have also sought to deny nations in the region the right to operate “well regulated” investor-immigration programmes, gaming and offshore banking industries under the guise that these ventures are harmful to their jurisdictions.

“The reality is that their policies are harmful to us and evidently designed to keep us in economic dependency,” he lamented. “The question is, what is next? They may soon resolve that our very existence is harmful to them.”

The PM said that resisting these “deceptive acts of economic aggression against our respective countries” is another reason that Caribbean countries should strengthen their union.