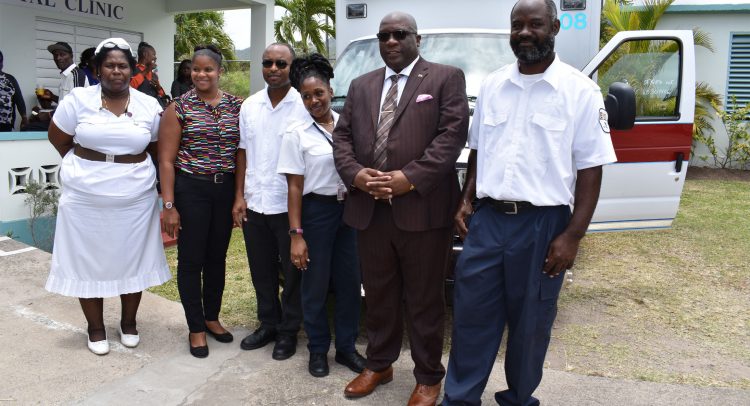 BASSETERRE, ST. KITTS, August 1, 2018 (PLP PR Media Inc.) — Prime Minister, Dr the Hon Timothy Harris, has said that the government cares about nurses and all other healthcare workers. He has advised that the
current 12-hour nursing shift on the Surgical Ward and Intensive Care Unit at the Joseph N. France General Hospital was implemented to address some staffing issues and was unanimously agreed by people working in those wards.

“They (opposition) say that we have been unfair because we introduced on a pilot basis only at the Surgical Ward, and the Intensive Care Unit a 12-hour shift,” said Dr Harris on Tuesday July 31 when he addressed the nation at a re-commissioning ceremony for a Dental Clinic and EMT/Ambulance Service at the Mary Charles Hospital in Molineux.

According to Prime Minister Harris, who also serves as CARICOM’s lead spokesperson on human resources, health and HIV matters, a unanimousdecision was taken to pilot the 12-hour shift during a staff meeting at the Joseph N. France General Hospital on July 6.

“I heard Minister (of Health the Hon Eugene) Hamilton say that this was unanimously agreed by the people working in those wards,” reported Prime Minister Harris. “The election losers do not want you to know that 12-hour nursing shifts have become the norm in almost every developed country including United States of America and the United Kingdom.”

Dr Harris told those gathered for the ceremony who included the two ministers of Health and Senior Ministry of Health officials including Permanent Secretary Mrs Delores Stapleton Harris, Chief Medical Officer Dr Hazel Laws, Operations Manager Ms Gail Cranstoun, and Director of Institutional Nursing Services Matron Sonia Daly-Finley, that St. Kitts and Nevis will never be last in the class of progressive entities and work was being done to ensure a progressive health sector and responsive system.

“Indeed research coming out of United States finds that most hospitals in the USA operate on 12-hour nursing shifts because they are easier for the administrators to manage, and nurses like them,” reported the Prime Minister. “But most importantly because it is not just them, the patient care is more efficiently and beneficially delivered. It is about you. It must be about you.”

Prime Minister Harris took a swipe at those spreading what he termed as fake news that the Government does not care about the nurses nor acknowledge the splendid work that they do. He pointed out that the
government cares about the nurses, doctors, and all healthcare workers in the country.

“That is why we took someone who has had an excellent record as a nurse in (Mrs) Delores Stapleton Harris and put her in charge of health administration in the country (Permanent Secretary),” observed Dr Harris. “There could be no greater signal of appreciation of the value and work of our nurses than what we have done to them.”

Prime Minister, Dr the Hon Timothy Harris, who is also the Area Parliamentary Representative for Constituency Number Seven, reported that he had been advised by the Ministry of Health that when the government opens the Tabernacle Health Centre it (Ministry) will bring home Nurse Sylvia Gannett to officially open the health centre in recognition of her outstanding service as a healthcare professional, midwife, community nurse, and administrator at the hospital. He ended by saying: “So we do love our nurses.”