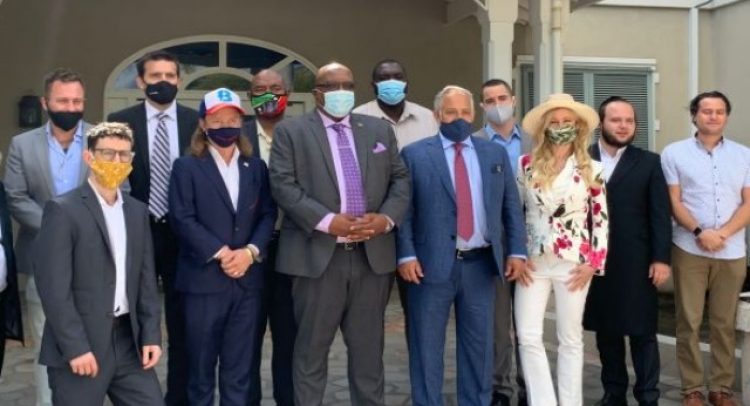 On Tuesday, January, 11, 2022, Prime Minister Dr. the Honourable Timothy Harris met with a group of investors led by billionaire American entrepreneur and former actor Mr. Brock Pierce to discuss several areas available in the local economy for collaboration and investment.

“Because we are still relatively young with our independence going on thirty-eight (38) years, there is still a lot of scope for persons to pioneer in several areas of our economy. We are happy from the presentation that you have a broad view which is important, that you want to contribute to the country beyond the traditional and we recognize that making money is important, but making money from doing something meaningful and constructive to the society, shaping it and developing and making it a better place is always welcomed, ” said Dr. Harris.

“Our economy is supportive of private sector investment and we have extremely good relations with the United States of America (U.S.A) that continues to be our main market for exports and imports. We have a small but viable manufacturing sector which was critical in producing key components for ventilators early in the COVID-19 pandemic. Though we may be small, among every criterion in terms of socio-economic development, we are towering way ahead of the class,” said Prime Minister Harris.

The digitalization of areas within the domestic economy was top on the agenda between the Bitcoin guru and Prime Minister Harris, an area described as essential to sustainable economic development, along with investment in geothermal energy. Prime Minister Harris also discussed the Federation’s world-renowned tourism product, which encompasses both leisure and education tourism as drivers for development.

Mr. Pierce, through his organization, has created a Plastic Reduction Credit (PRC) in an effort to protect phytoplankton, a major producer of carbon, and aid in the removal of tons of plastic from the world’s oceans. Mr. Pierce described his mission to the Federation of St. Kitts and Nevis as a success, already identifying several areas of economic interest where investment could be made.

“I think it was a fruitful mission where we got the chance to come to see what we thought were opportunities and to verify that these are opportunities we want to pursue further. Now the next step for us is to organize a team and begin to do our due diligence. The feedback from everyone who is a part of this delegation is enthusiasm, excitement, gratitude for the way we were hosted, the Government’s availability and support,” said Pierce.

“So, we are very excited about the future possibilities. This is a nice place to do work, so we are very excited too; there is broad excitement with the entire team here. We are very happy about ocean clean-up and removing plastic from the ocean. When we eat fish, some of our fish is consumed with a lot of plastic and it is a problem that most people fail to realize. Through Diatom.fund we are working to fix this problem,” said Mr. Pierce.

Prime Minister Harris has earmarked the year 2022 the beginning of transformative economic diversification led by e-commerce digitalization and the development of new industries, to create better jobs and improve the lives of all citizens and residents.

Grant says the Ministry of Tourism has worked tirelessly to rebuild