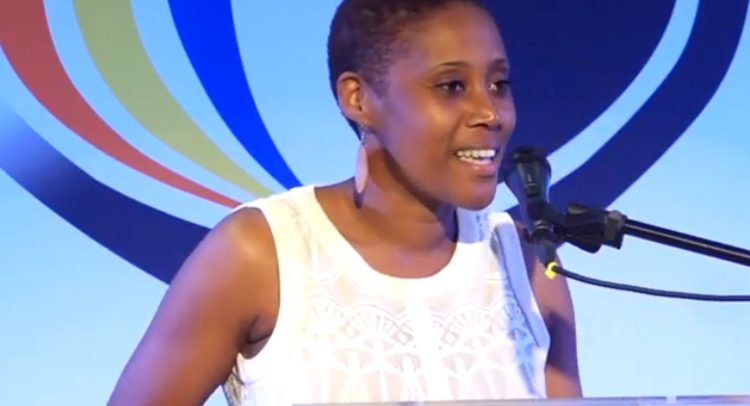 Team Unity’s Caretaker for St. Christopher Three, Senator the Hon Akilah Byron-Nisbett, has done so much for the people of West Basseterre even though she was not an elected member of Parliament. Prime Minister Dr the Hon Timothy Harris has made an appeal to them to lend her their votes on June 5, for her to deliver more.

“The Honourable Lady Senator is not yet the elected representative but she can do, has done, and will continue to do for you the people of West Basseterre,” said Prime Minister Harris. “I joined her in saying to you, lend Akilah Byron-Nisbett your vote in this election – lend it to her – don’t just give it to her. Lend it to her and if at the end of the five-year term she has not delivered, recall your loan.”

Prime Minister Harris made the remarks on Friday evening May 22 at the second Team Unity Stronger, Safer Future Virtual Election Campaign Launch 2020 for a candidate, where Senator Akilah Byron-Nisbett of the Peoples Labour Party (PLP) for St. Christopher Three (West Basseterre) was launched via the virtual platform for the June 5 General Election.

“That is the challenge, it’s a loan – recall it in,” Dr Harris told voters in West Basseterre. “I want to assure you that she will get every support of the Prime Minister and of every Cabinet member to ensure that she delivers beyond expectations to the people of West Basseterre. So come out in the old time way, into a brand new, safer and brighter future with Team Unity and Akilah Byron-Nisbett.”

The full slate of Team Unity’s eleven candidates, now dubbed the Dream Team, was virtually unveiled on Tuesday May 19. Ambassador Jonel Powell, who is also the Chairman of the People’s Action Movement and candidate for St. Christopher Two, was the first candidate to be launched via the Team Unity Stronger, Safer Future Virtual Election Campaign Launch 2020 platform on Wednesday May 20.

The colourful ceremony that was watched world-wide through various social media platforms. Senator Byron-Nisbett, who was the Deputy Speaker in the National Assembly, was roundly endorsed by Minister of Agriculture et al, the Hon Eugene Hamilton, the Deputy Prime Minister the Hon Shawn Richards, and Prime Minister Dr the Hon Timothy Harris. The ceremony was chaired by Ambassador Jonel Powell.

Prime Minister Harris is the National Political Leader of the Peoples Labour Party (PLP), one of the three parties in Team Unity which is presenting three candidates for the June 5 General Election. He will be defending the St. Christopher Seven seat. Senator Akilah Byron-Nisbett is the party’s Deputy National Political Leader and also Chairperson of the PLP Constituency Number Three Executive Branch.

“You can’t help but feel something very positive is happening here with Team Unity Government,” remarked the Prime Minister. “Tonight you get another glimpse of the composition of the Team Unity leadership, and how well prepared we are for the second term to deliver a stronger, safer and better future for the people of West Basseterre and for the people everywhere.”

The three Team Unity candidates from Nevis, all from the Concerned Citizens Movement (CCM), Premier of Nevis the Hon Mark Brantley for Nevis Nine, the Hon Eric Evelyn for Nevis Ten, and the Hon Alexis Jeffers for Nevis Eleven, were acknowledged.