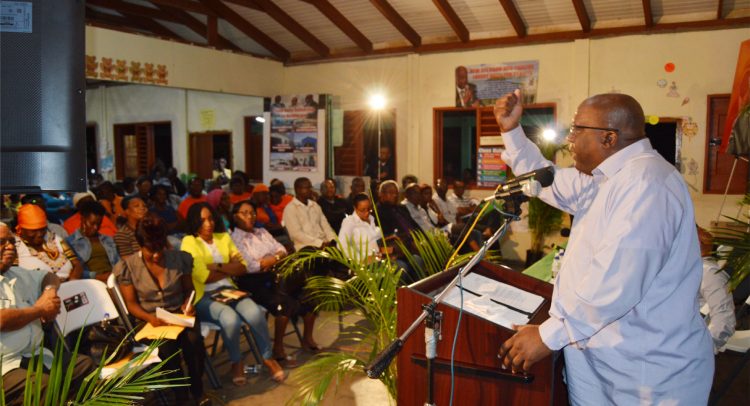 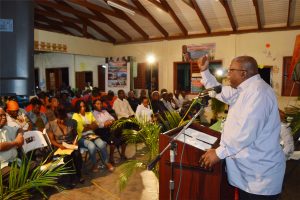 At a well-attended town hall meeting at the Joshua Obadiah Williams Primary School in Molineux on Tuesday night February 27, Prime Minister Dr the Hon Timothy Harris announced government will in March establish a one million dollar fund to help those who want to do serious farming.

The second in a series of town hall meeting dubbed ‘The People’s Forum – Let Your Voice be Heard’ organised by the Team Unity Administration as part of its third anniversary activities, Dr Harris told the participants that his Government cares about what is happening to the people of the Federation.

The town hall meeting, whose proceedings were chaired by Tourism Minister the Hon Lindsay Grant, was also addressed by the Federal Minister of Foreign Affairs, the Hon Mark Brantley who is also the Premier of Nevis, and the Hon Eugene Hamilton who is the Minister of Agriculture, Health, National Health Insurance, Human Settlement, Community Development, Gender Affairs, Social Services, Cooperatives and Lands.

Dr Harris told the participants, and those listening live by radio or via the internet, that the Team Unity Administration in its three years in government had been working hard the area of agriculture and advised that it would want to see people involved in serious agricultural development, stating that the government was prepared to put money where its mouth is.

Most of the participants at the town hall meeting were drawn from agricultural backgrounds, and could not hide their joy when Prime Minister Harris told them that if they want some workers, he would bring in trainees under the Government’s Skills Training Empowerment Programme (STEP).

“You could not get a better deal anywhere in the world,” said Dr Harris who added that the government was doing that “because we appreciate that as a small country the more we can do for ourselves the better able we are to guard our independence. The more we can produce the better control we have on our health, fresh fruits and vegetables, and we will give you full support.”

In the area of entrepreneurship, Prime Minister Harris, who is also the Minister of Finance told the participants that before the Team Unity Government got in office, people were being asked to pay as much as 20% upfront to get loans. He wondered how that would have been equitable when one needs money and is asked to put up money.

He noted that Team Unity Government introduced the Fresh Start Loan Programme through the Development Bank of St. Kitts and Nevis, for mortgage scheme and loan financing, in which over $50 million has been put in and over 650 persons throughout the length of the Federation have benefitted.

According to Prime Minister, Dr the Hon Timothy Harris, the third town hall meeting in the People’s Forum series will be held on Tuesday March 6 in Sandy Point, St. Christopher Number 5, advising the participants “and the series continues thereafter.”