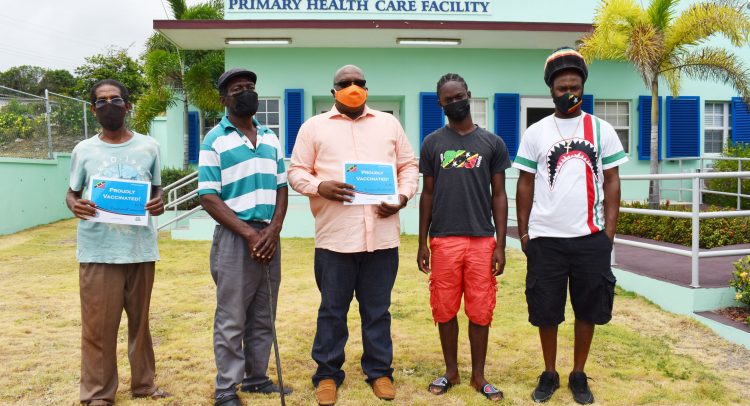 In observance of the day, Team Unity Leader and Prime Minister Dr the Hon Timothy Harris remained grounded in his constituency (St. Christopher Seven), specifically at the Sylvia Garnette Primary Health Care Facility in Tabernacle, where he not only continued encouraging persons to add premium to their health by getting vaccinated against the deadly Covid-19, but also by holding one-on-one consultations.

“Today is a special day for us in the Team Unity Family, and it comes at a time when everyone has now come to understand that Covid-19 is respecting nobody,” said Prime Minister Harris. “Covid-19 don’t give you or a child in the primary school or early childhood centre notice that it is visiting everywhere. Covid-19 has no respect for teachers in schools. It is everywhere. Covid-19 does not respect doctors or nurses, politicians, bakers, bankers everywhere it is.”

Dr Harris has been turning up at the Sylvia Garnette Primary Health Care Facility in Tabernacle every Saturday since the healthcare facility started offering the Covid-19 vaccine on Saturdays to encourage persons coming to take the vaccine. He thanked and commended persons who have so far offered to take the vaccine saying they have done the right thing by protecting not only themselves, but their loved ones and the public on a whole.

According to records released by Nurse Norine Gabriel, who facilitated the vaccination session, a total of 35 persons took the vaccine on Saturday June 5. Of that number twenty persons took the first dose, and 15 took their second dose.

Nurse Gabriel, who thanked Prime Minister Harris for not only encouraging persons taking the vaccines but the healthcare workers as well, said that Mrs Jacqueline Liddie made arrangements for her (Nurse Gabriel) to go and vaccinate an elderly person in the comfort of their home.

Nurse Vivien Greene-Isaac who assisted Nurse Gabriel noted that twelve persons who had received the second dose of the Oxford AstraZeneca Covid-19 vaccine two weeks earlier, returned to the healthcare facility to collect their certificates which had been officially stamped by the Ministry of Health. The card signifies that they are now fully vaccinated.

In the meantime, Prime Minister Harris used the time he spent at the Sylvia Garnette Primary Health Care Facility to hold one-on-one consultations with constituents and persons from outside the constituency who had come either for vaccinations or had escorted relatives and friends who had come for the vaccinations.

“I want to let my constituents know that I will never desert them,” noted Dr Harris. “I will always be there for them and I am happy for every occasion to better serve them. We had restarted the one-on-one consultations, which were held at the Lodge-Ottley’s Community Centre, but had to halt them as result of the new guidelines issued by the Covid-19 National Task Force in relation to large gatherings.”

According to the Honourable Prime Minister, the Sylvia Garnette Primary Health Care Facility offers ample space where he was able to sit for the one-on-one consultations away from those waiting to get vaccinated. Going forward, he said that he will be using the healthcare facility on a limited basis to listen to the needs of the people, noting that such consultations help him in serving the people better.

Featured Photo – Prime Minister Harris (centre) and Mr Vince ‘Tokey’ Matthew (right) both who are fully vaccinated, pictured with three of the persons who were brought by Mr Matthew to take the vaccine’s second dose.

Taiwan, feuding with China, gets vaccines from Japan