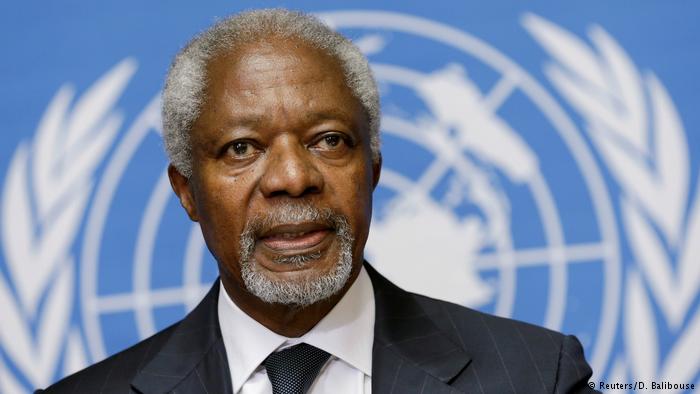 On behalf of the Government and people of St. Kitts and Nevis, Prime Minister Dr. the Honourable Timothy Harris expresses heartfelt condolences to the family and loved ones of Kofi Annan, the first black African to head the United Nations as its Secretary-General. Mr. Annan died Saturday, August 18th, 2018 in Bern, Switzerland at the age of 80 years old.

Prime Minister Harris also extends his sincere sympathy to the United Nations, which Kofi Annan led from 1997 to 2006.
In 2001, Kofi Annan was awarded the Nobel Peace Prize jointly with the United Nations “for their work for a better organized and more peaceful world.”

Mr. Annan subsequently voiced his hope to UN staff that winning the Nobel Peace Prize “will urge us forward and encourage all of us to tackle our tasks with even greater determination.”

“To say Mr. Annan was determined would be an understatement; he was an indefatigable champion of human rights and dignity for all,” the Prime Minister of St. Kitts and Nevis said while reflecting upon the former UN Secretary-General’s distinguished life of service.

Prime Minister Harris added, “Kofi Annan’s remarkable efforts will forever live in history and in our hearts. He was a trailblazer and an ardent defender of progress, always pressing fearlessly ahead to improve, inform and inspire the world.”
Indeed, among Mr. Annan’s best-known quotes is, “Knowledge is power. Information is liberating. Education is the premise of progress, in every society, in every family.”

The Honourable Prime Minister, who serves as CARICOM’s Lead Head on Human Resources, Health and HIV/AIDS, also noted that in 2001 Kofi Annan held the first United Nations General Assembly Special Session on HIV/AIDS and called for a global war chest, resulting in the creation of the Global Fund to Fight AIDS, Tuberculosis and Malaria.

In remembering Mr. Annan, the Global Fund’s website says, “No one contributed more to the creation and ongoing support of the Global Fund than Kofi Annan.”

The Global Fund partnership mobilizes and invests close to US$4 billion a year to support initiatives of local experts in countries most in need.

UNAIDS honoured Kofi Annan with its Award for Leadership at the 2016 UNAIDS fundraising gala held in Basel, Switzerland.