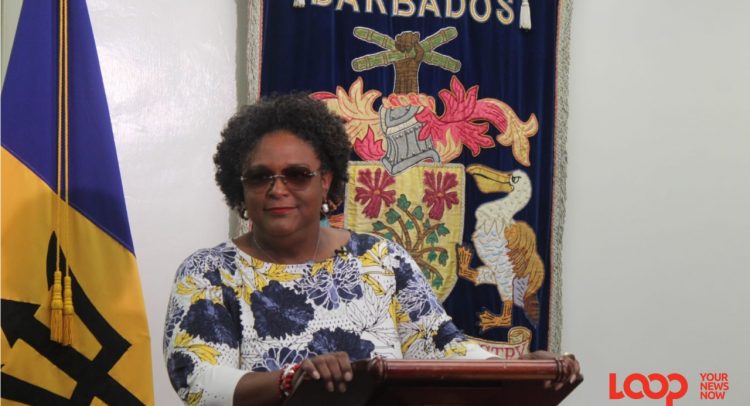 Prime Minister Mia Mottley has warned her Cabinet that in event of any wrong doing she is prepared to cross the floor of House of Assembly and lead an opposition to the Government she now heads.

The newly elected leader of Barbados who came to office last Thursday with an overwhelming mandate represented in her Barbados Labour Party (BLP) win of all 30 seats of Parliament, made it clear that she will not tolerate any breach of trust given by Barbadians.

Delivering the feature address following the swearing in of 26 members of her cabinet, who along with herself and Attorney General Dale Marshall received their instruments of office from Governor General Dame Sandra Mason at the Esplanade, Bay Street on Sunday, Mottley said that the win of all parliamentary seats means, “we now have an even higher duty to contend with”.

She assured the Barbados electorate that their ‘generosity’ to BLP candidates “will not be misused or abused’.

Mottley noted that even without the enormous victory it was possible for “dictatorial and lawbreaking tendencies to emerge”, but insisted, “it will not be so with any government under my leadership”.

She added that “on the contrary I have already warned some of my parliamentary members that if I ever find it necessary, in the interest of fair play, and balance I am perfectly willing to convert myself into the most formidable leader of opposition to this government”.

Noting that the BLP victory leaves it and the country without a parliamentary opposition to scrutinize the actions of Cabinet, the executive, she referred again to the plan to make two senatorial seats available through a constitutional amendment in the hope that they will be taken by the Democratic Labour Party “for their voices to be heard in our Parliament”.

She explained that while extending to the DLP, which garnered the second most votes, an opportunity to make its voice heard, she has no legal power “to remedy that efficiency of their absence” in the House of Assembly, the home of elected members.

The Prime Minister however made it clear that she has no desire to place them in the House because such seats were not earned through the wishes of Barbadians, “because this abundance of riches derive directly from the expression of the will of the people whose infinite wisdom I wholeheartedly received and accept”.

She said that the enormity of the victory puts upon the BLP Government a responsibility to conduct the business of Parliament differently and the ‘unique opportunity’ to involve other arrangements for “inclusive dialogue and participation of a wide cross-section of Barbadian stakeholders in the business of governance”.

Mottley spoke of an intention to innovatively use the committee system of Parliament “to co-opt external participation and input,” and to have “an enhanced consultative process with an expanded and re-energized social partnership through the structure of our proposed People’s Assemblies and National Dialogues”.

“The checks and balances function that is expected of a parliamentary opposition can be carried out by you the people of Barbados,” she said and pledged of her government “the highest standards of transparency and accountability, discipline and fairness”.

Mottley expressed her gratitude to “every Barbadian, for standing up, for speaking out, and for showing up when it mattered most to demonstrate the astounding power of your vote”.

“Because of you our country has just seen the most emphatic and unambiguous expression of the will of the people in its history,” she said to the large crowd that poured out of the Esplanade and onto the lawns of Government headquarters

Mottley said “the new dawn is here”, and while Government and Cabinet are amazed and affected by the mandate “placed on our shoulders …We acknowledge the solemn duty this demands of us, never to betray your trust”.

“It now falls to us to translate hope into action”, she said, adding that there is “no time for pause and there is certainly no place for triumphalism and exultation. We have serious work to do, and serious problems to solve”.

“I will be holding the ministers of the Crown of Barbados to the highest standards of efficiency and productivity.”

The island’s eight Prime Minister also insisted that “divineness and partisan tribalism must not be allowed to destroy this nation”.

She assured that her Government was eager “to restore and re-invigorate its partnership with you in pursuit of our vital regional integration goals”. (GA)