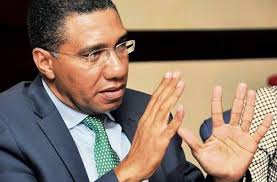 PRIME Minister Andrew Holness Tuesday night rejected a suggestion by the Opposition in the House of Representatives for the immediate removal of Minister of Science, Energy and Technology Dr Andrew Wheatley from office.

Holness insisted that there was a process which is being followed and, depending on the outcome of that process, he would make a public declaration within days.

“I am saying to you that there is a process to get to that point. I am at a point now where I have gathered enough information. I am now awaiting the proper documentation,” he added, before assuring that the response would come actually “in a matter of days”.

He was responding to questions from Opposition spokesman on national security, Fitz Jackson, who suggested that it would have been best for Dr Wheatley to be removed from office until investigations into allegations of corruption at the State-owned oil refinery, Petrojam, are completed.

Jackson claimed that by allowing Wheatley to continue as the minister with responsibility for the scandal-hit oil refinery the Government would be preserving the status quo amid the “grave concerns” which had been raised by the Opposition.

“I have to be careful and go this process of discovery, and even when I am speaking here I am giving the caveat that I can’t say that it is definitive. It is to the best of my knowledge and I will have to wait until I get this now in black and white,” Holness responded.

“And I am saying to you, Members, that I can understand the gravity of some of the things that are said, but for me to act I must have definitive information,” he explained.

Responding to the question as to whether he was aware, before now, that the up-to-recent chairman of board of Petrojam, Dr Perceval Bahado Singh, who resigned a week ago, was residing abroad, Holness said he had not known.

He said that Bahado Singh was not appointed directly to the chairmanship of the Petrojam board, but was elevated to that position, after issues relating to the US executive order led to the Venezuelan chairman quitting.

He said that at the time Bahado Singh was appointed to the board he was residing in Jamaica, as far as he knew. He also explained that Bahado Singh had benefited from travel allowances which had also been paid to his predecessor.

Holness said that it was not a policy requirement for the submission to the Cabinet for approval of the board to state whether Bahado Singh was still living in Jamaica or not.

“This is the kind of policy change we look at. While I agree that it is something that should have been disclosed, what we have discovered is that this may very well be a systematic weakness, and the Government has a duty to make the kind of system-wide policy response that is necessary,” he stated.

He said, too, that he had not reached the point where he has been fully updated on the various issues. However, he said that in the interim he has received a report from Petrojam.

“We have asked them questions, they have given us answers, minutes have been taken. We have said that this is what we have decided to do. It has to be documented so that I have it on paper,” he noted.

Holness said that the questions which were raised by the Opposition in the House exemplified the challenges he was facing in dealing with the allegations.

“This is a very good process of discovery for me, and I have discovered some things, based on what is being said, and I am seeking more information,” he told the Opposition.

The prime minister said that an announcement will be made in short order on the specific policy actions to be taken by Cabinet regarding weaknesses in the management at the oil refinery after all the relevant information has been gathered.

He said that, in the interim, Cabinet plans to take certain policy actions to ensure that Petrojam functions with probity, transparency and accountability, and that is why the Public Accountability Inspectorate has been asked to investigate certain aspects that there is still no clarity on, and to do it quickly.