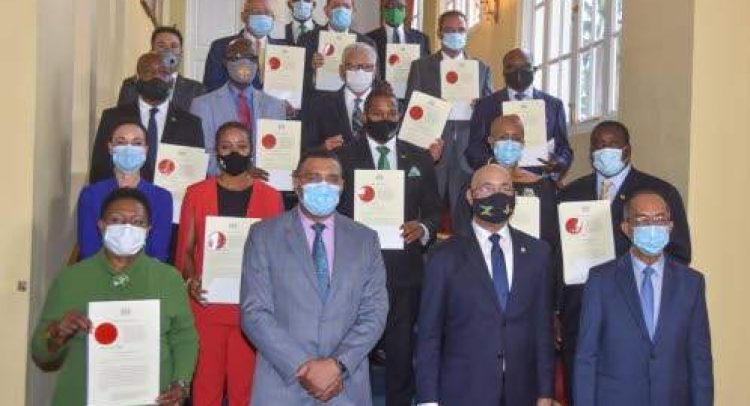 In a short, piercing speech at King’s House yesterday, Prime Minister Andrew Holness said his job will be even tougher now with such a large majority in Parliament, and admonished members of his new Cabinet to stay in line in their conduct of the nation’s business.

Addressing the swearing-in ceremony for the remaining 14 ministers of his 19-member Cabinet, Holness says that even with the the Jamaica Labour Party’s 49 to 14 win in the September 3 General Election he has not felt the “thrill of victory”, despite having experienced the “agony of defeat” before.“I expressed to them [Cabinet members] that I was very pensive because the character of men will be tested, and we will know them, especially now with a large majority. My job is even that much more difficult to ensure that this Cabinet, this Government stays in line with the expectations of the people,” he stated in his under 10-minute address. Holness said the country is at a turning point which will be determined by the character of governance.

“We are at a tipping point, something new and good and powerful can happen in our country, by our actions, if we decide as ministers to exercise the power and authority vested in you by these instruments with the highest level of integrity, dignity and efficiency.

”Something good can happen in our nation, it depends on what we choose to do before the electorate chooses to do what they must,” he stated to the roomful of new ministers and state officials.

The prime minister stressed that it had not been an easy task putting his Cabinet together and that he was paying keen attention to the raging debate that ensued following the announcement of the remaining members of the Cabinet last Friday.

Four key ministers minister of national security and Deputy Prime Minister Dr Horace Chang; Minister of Finance and the Public Service Dr Nigel Clarke; Minister of Health and Wellness Dr Christopher Tufton; and Minister of Foreign Affairs and Foreign Trade Senator Kamina Johnson Smith were previously sworn in to return to the portfolios they held before the general election.

In defending his Cabinet picks, Holness argued that based on the Jamaican system of governance, ministers are not expected to be experts in their portfolio areas but that the public is of the view that those selected to head ministries should have significant competence in the areas of their appointment.

“The Cabinet must be returned from the people that are elected… so what then is the essence of a minister? Is it competence in a subject area or is it good judgement to administer the affairs of the public, to be able to filter good advice from bad advice, to find the right people to be advisers?

”What is the essence of the ministerial responsibility? Is it knowledge of the subject or is it integrity of the character of the person, that the discretion and power vested in the minister will always be used for the public interest and not for personal interest?” the prime minister posited.

He said that while he acknowledges and understands the concerns of the public, much of those could be satisfied by deeper knowledge of the mechanics of government.In the meantime, Governor General Sir Patrick Allen urged the Cabinet members to provide the leadership needed in Jamaica now.

“In these turbulent times, and the uncertain times, people look to their leaders for clear signals, actions and directions that will encourage economic, social and political stability, and the hope that there will be good governance and their lives will be better,” said Sir Patrick.

“You will therefore need to engage your constituents and the people, and never forget that we the people made this happen for you,” added Sir Patrick.

Those who took the oath of allegiance and the oath of office, and received instruments of appointment yesterday were:

Senator Matthew Samuda – minister without portfolio in the Ministry of National Security;

Everald Warmington – minister without portfolio in the Ministry of Economic Growth and Job Creation; and

Senator Aubyn Hill – minister without portfolio in the Ministry of Economic Growth and Job Creation .

Nine state ministers will be sworn in this afternoon at another King’s House ceremony.They are:

Zavia Mayne – Ministry of Labour and Social Security; and