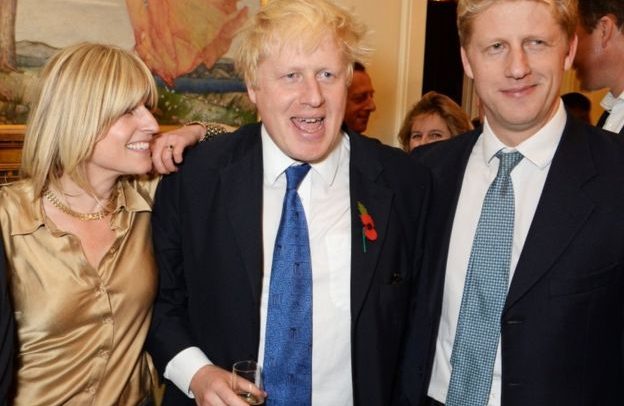 Jo Johnson, the younger brother of Prime Minister Boris Johnson, is resigning as an MP and minister, saying he is “torn between family loyalty and the national interest”.

The business minister and Tory MP for Orpington, south-east London, cited an “unresolvable tension” in his role.

Mr Johnson voted Remain in the 2016 EU membership referendum, while his brother co-led the Leave campaign.

Mr Johnson’s resignation follows the removal of the Tory whip from 21 MPs this week for supporting moves to prevent a no-deal Brexit.

Our political editor tweeted that Mr Johnson was “understood to be upset about the purge of colleagues” and that the brothers were “in very different places” on Brexit.

Speaking at an event in West Yorkshire, Boris Johnson called his brother a “fantastic guy” and a “brilliant minister”.

But he added that he had a “different approach to me about the European Union”.

Jo Johnson resigned as a minister last year in protest at Theresa May’s Brexit deal with the EU. But he re-entered government during the summer, after Conservative Party members elected his brother as leader.

Jo Johnson’s resignation also comes as the government announced it would give MPs another chance to vote for an early election on Monday.

The fresh vote on an early election is scheduled just before Parliament is due to be prorogued – or suspended – from next week until 14 October.

A Downing Street spokesman said: “The PM, as both a politician and brother, understands this will not have been an easy matter for Jo. The constituents of Orpington could not have asked for a better representative.”

Former cabinet minister David Gauke, one of the MPs who lost the Conservative whip, tweeted: “Lots of MPs have had to wrestle with conflicting loyalties in recent weeks. None more so than Jo. This is a big loss to Parliament, the government and the Conservative Party.”

Labour’s shadow education secretary Angela Rayner said: “Boris Johnson poses such a threat that even his own brother doesn’t trust him.”

Brexit Party leader Nigel Farage said the resignation showed the “centre of gravity in the Conservative party is shifting rapidly”.

But, in a tweet, Rachel Johnson, the Remain-supporting sister of Boris and Jo Johnson, said “the family avoids the topic of Brexit, especially at meals, as we don’t want to gang up on the PM”.

Jo Johnson appeared at several of his brother’s campaign events during the Conservative Party leadership contest.

At the last general election, Jo Johnson held the Orpington seat by a 19,461 majority.

He is expected to stand down at the next general election, rather than leaving Parliament immediately and prompting a by-election.

Northern Ireland Minister Nick Hurd also announced that he would not stand as an MP in the next election.

He said politics had become “dominated by the ongoing division over Brexit”. He also his life had been “changed profoundly by the birth of my two youngest children”.