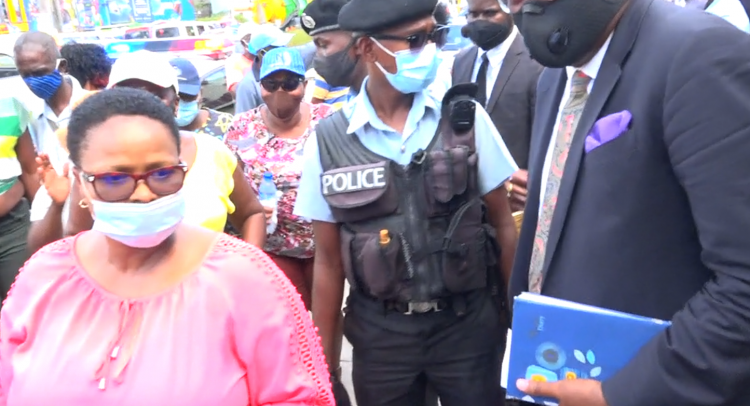 Chairperson of the People’s National Congress Reform (PNC/R), Volda Lawrence, was on Wednesday placed on $100,000 bail on two charges which allege that she conspired with embattled Region Four (Demerara-Mahaica) Returning Officer (RO) Clairmont Mingo to declare fraudulent results for the March 2, 2020 General and Regional Elections.

Lawrence appeared before Chief Magistrate Ann McLennan in that Georgetown magistrate’s court and was not required to plead to the indictable charges, the first of which alleged that on March 5, 2020 at the Office of the Returning Officer for Region Four at High and Hadfield Streets, Georgetown, she conspired with Mingo and others to declare a fraudulent account of votes for District Four for the Regional Elections of the March 02, 2020 General and Regional Elections.

The second charge alleged that Lawrence, on the same day and at the exact location, conspired with Mingo and others to declare a fraudulent account of votes for District Four for the General Elections of the March 2, 2020 General and Regional Elections.

State Counsel Teriq Mohammed appeared for the prosecution, while Attorney-at-Law Nigel Hughes is representing Lawrence, who has been placed on $50,000 bail on each of the charges. Her next court appearance is on December 9.

On Tuesday, Lawrence, formerly the Minister of Public Health under the APNU/AFC Government, presented herself at the CID Headquarters at Eve Leary Georgetown, where she was wanted for questioning in relation to events that unfolded during the elections. She was released on $100,000 station bail, and was ordered to return there on Wednesday. She did, and was arrested and eventually appeared before Chief Magistrate Ann Mc Lennan on the two charges.

Back in March, now Culture, Youth and Sport Minister Charles Ramson Jr, who was then a Counting Agent for the People’s Progressive Party/Civic (PPP/C), had filed private criminal charges against Mingo and Lawrence following the RO’s declaration of unverified results for Region Four.
Lawrence first appeared in court on those charges in August, and was released on $100,000 bail.

The charges state that Mingo, having been procured by Lawrence on or about March 5, 2020 at the Command Centre for the Guyana Elections Commission (GECOM) on High and Hadfield Streets, uttered to Chief Elections Officer (CEO) Keith Lowenfield the election results for Region Four, knowing them to be forged, with intent to defraud the people of Guyana.

The matter is still pending in court.

Mingo’s unverified declaration for Region Four, which was subsequently set aside by acting Chief Justice Roxane George, was signed by himself and Lawrence – the lone representative from the political parties that contested the elections. The other parties had objected to the declaration after the verification process was not fully complied with by Mingo.

During the National Recount, it was discovered that Mingo had inflated the figures to give the then incumbent APNU/AFC a lead at the polls. However, the recount exercise showed that the PPP/C won the elections with 233,336 votes, while the coalition secured 217,920 votes.

As a consequence, Mingo was charged and arraigned last month on four counts of misconduct in public office.

In addition, he is facing a private criminal charge jointly with Lawrence, for which he is currently out on self-bail. State Prosecutors are expected to call over 100 witnesses when Mingo goes on trial in relation to the misconduct charges.