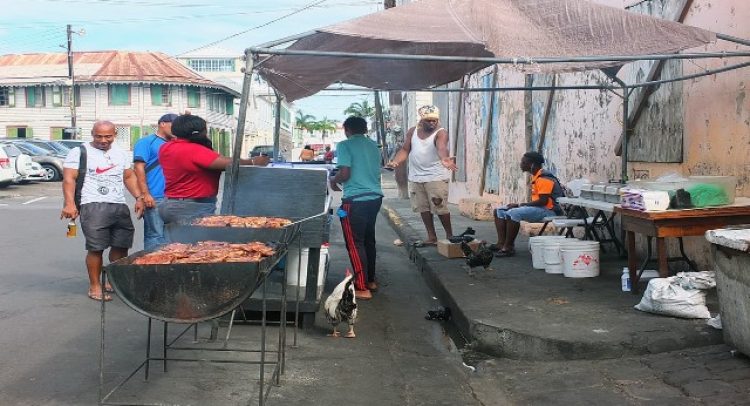 Basseterre, Friday, 25th June 2021, (MyVue News.com)-Vendors in sections of Basseterre are being asked by the police and the Public Works department, to remove their items left on sidewalks and streets, and normally used to conduct their business affairs.

“The Traffic Department is appealing to individuals to kindly remove their tents, tables, and associated items that were left behind on the sidewalks and streets of Basseterre,” said the notice from the security forces.

It continued, “The deadline to have these items removed is Friday, July 09, 2021. Failure to do so would result in these items being confiscated.”

The other notice, which was a joint one from the Traffic Department and Public Works Department, appealed to owners of vehicles who usually park in front of the Shoreline Plaza, to kindly discontinue parking in that area.

“This is to mitigate potential conflicts in relation to the Traffic Lights along the Bay Road,” said the notice.

The problem of street vending has been a troubling one for motorists and pedestrians for over 20 years, and various attempts in the past to arrest the situation fell by the wayside.

Many pedestrians have complained about the unavailability of the sidewalks, which in many areas, have been taken over by vendors, making it difficult and impossible in some instances to avoid walking in the streets to move about the city.

A special committee was established earlier this year to address the issue of street vending.

Prime Minister Timothy Harris at the time of the announcement reaffirmed that his administration supports the entrepreneurial spirit and small business operations in the country, but noted that the overcrowding of the streets in Basseterre by vendors, exposes pedestrians, particularly the differently-abled and the elderly, to risks and hazards, posed by oncoming traffic, said a release from the government.

Some vendors have already relocated their operations to the nearby public market, where stalls were provided for the conduct of their businesses.

'F9' adds John Cena, but 'The Fast Saga' feels like it's just spinning its wheels