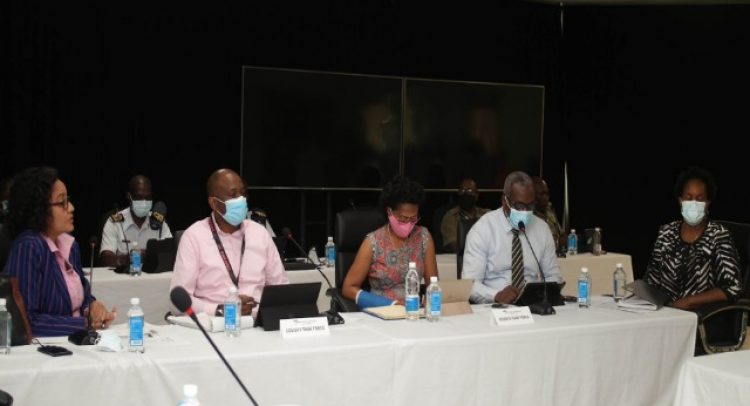 Basseterre, 31st March, 2021 (MyVue News.com)–The five (5) political parties that contest elections in St. Kitts & Nevis, were on Tuesday, 30th March, 2021, given the opportunity to meet and dialogue with top officials responsible for managing the country’s response to the Coronavirus global pandemic.

This was an issue that the main St. Kitts & Nevis Labour Party, (SKNLP), agitated for, since the start of the crisis, one year ago.

The meeting also came at a time when the Task Force has been engaged in a series of public consultations, involving community groups, business places, churches, and citizens nationally.

It was also held against the backdrop of a new series of community vaccination clinics, in addition to the inoculation of residents at the health clinic facilities across St. Kitts & Nevis.

At the meeting, held at the Conference Room of the National Emergency Management Agency, (NEMA), which has also become the headquarters for the COVID-19 Task Force, there were representatives from the People’s Action Movement, (PAM), St. Kitts-Nevis Labour Party, Concerned Citizens Movement, (CCM), People’s Labour Party, (PLP), and the Nevis Reformation Party, (NRP).

The opposition SKN Labour Party said that it agreed to give its support, not for the politics, but in the overall interest of the country, and to help save lives and restore the livelihood of citizens.

The Party issued a press release, ahead of the meeting, in which it said, “The St. Kitts-Nevis Labour Party is joining the COVID-19 Taskforce in a consultative role.”

Labour says it wants to be part of the  “All of Society approach” when it comes to how the country manages COVID-19.

At Tuesday’s meeting, the SKNLP was represented by Konris Maynard, who served in the National Assembly as the Representative for West Basseterre, from 2015-2020 and is now the Caretaker of that constituency. The Party’s General Secretary, Diana Williams-Humprey, also joined her comrade, Maynard.

“The Labour Party supports vaccination, but we recognize its a personal choice. And for persons to make an informed choice, there must be education. There must be sensitization and there must be consultation,” said the General Secretary of the Labour Party, just after the meeting concluded.

In the press release shared with the media on Tuesday, the opposition stated, “the SKNLP has always expressed interest in supporting the government’s management of the pandemic. In matters which concern public health and the social fabric of this country the SKNLP will always prioritize participation over politics. Therefore, we will take this long-awaited opportunity to contribute to the management of COVID-19.”

The General Secretary also added in her post meeting interview that “We are not against consultation, we are open to consultation, as long as, at the end of the day, we understand where our people are at, in terms of their realities in St. Kitts & Nevis.”

Some of those realities are what Maynard appeared to be speaking of when he said, in the same post-meeting interview, that they made strong representation, not only about the vaccine roll-out but also about how people are suffering, as a result of the pandemic.

He spoke to the delays in the disbursement of Severance Payments for some, adding that “people need help”, to deal with their economic situation. The government recently admitted to those delays but informed that they will be instituting a pay-out program to offer relief to citizens, while the administrative matters are being worked out.

Maynard also expressed in the meeting, what he said was the SKNLP disappointment that “it has taken 12 months, or a year, to date, to involve the single largest political Party in the Federation, that commands the support of the single largest block of people in the country.”

However, Williams-Humphrey expressed the “hope that this was not just about the optics, but rather, that finally, all of us can be part of the discussion about COVID-19, and its effects on the country, because at the end of the day, COVID-19 transcends politics.”

The other Party delegates included, Member of Parliament for Central Basseterre and Chairman of PAM, Jonel Powell; Chairman of the Concerned Citizens Movement, (CCM), Troy Liburd, and his Deputy, Latoya Jones; Dr. Janice Daniel-Hodge, the President of the NRP led her delegation that also included Dr. Patricia Bartlette; while the PLP was represented by its Chairman Warren Thompson and Party Organizer, Alex Nisbett.

The Task Force was led by Chairman, Abdias Samuel, along with Senator Wendy Phipps, one of the Ministers assigned to the Task Force, Chief Medical Officer, Dr. Hazel Laws, Chief of the Medical Staff, Dr. Cameron Wilkinson.

Other members from Police, Defense Force, Immigration, Customs, and other critical groups that occupy a seat on the Task Force, were equally present.