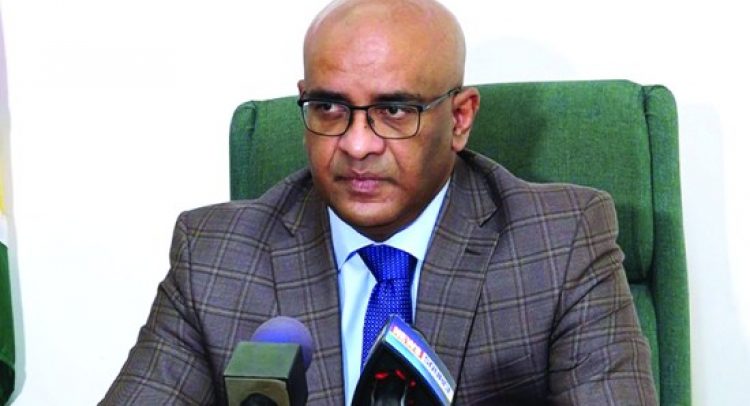 Elections candidates’ lists…
…PPP/C vows to implement “tougher legislation” on electoral fraud
The Opposition People’s Progressive Party/Civic (PPP/C) says it will implement tougher laws to guard against electoral fraud, after discovering that names were once again fraudulently obtained; this time in Region One (Barima-Waini) by a party for its lists of candidates and nominators, which were presented to the Guyana Elections Commission (GECOM) to enable the parties to contest the upcoming polls.

“We intend to tackle seriously laws on fraud surrounding the electoral process; to pass tough legislation. We cannot allow conmen and con artists (to lure persons) into supporting their lists or becoming candidates on their lists when those people are unsuspecting and they don’t even support them,” PPP General Secretary Bharrat Jagdeo promised at his weekly press conference on Thursday.
He pointed out that this is fraud, against not only those unsuspecting electorates, but the country as a whole, since those culpable political parties will get approval to go on the ballot paper when they would not have even legitimately had the minimum requirements to be there.
So far, GECOM has indicated that of the 13 parties that made submissions at last Friday’s Nomination Day, 11 have been approved to contest the March 2 elections.

But according to Jagdeo, the PPP/C was informed by GECOM after Nomination Day that it needed to replace a name on its Geographical List for Region One because one individual, Elroy Thomas, is on another party’s list.
“So we decided we’ll replace that name, because we have thousands of supporters in Region One. But Mr Thomas contacted us and said, ‘I never agreed to be the candidate or backer for any other party. I support the people’s Progressive Party. I’ve always supported the party’,” the PPP General Secretary related.
He also said that Thomas told him there was an individual going around communities in the region collecting names of about 50 persons, claiming that they are just checking to see whether they’re on the voters’ list.
“So we traced this… individual, and the individual then said he was collecting it for the Carter Center. So entire lists of candidates and backers could be fraudulently before GECOM, and the problem is: you and I – anyone of us – could become a backer and we would not even know, because it would not be made public; and because somebody forged our signature, or told us something else, like: ‘You’re signing for your pension’, like what they did at Whim… and then you become a supporter and backer for a political party,” Jagdeo posited.

This is not the first time this is happening. On Nomination Day, ahead of the November 2018 Local Government Elections (LGE), dozens of lists of names and signatures purporting to be backers of candidates were palpably defective because of forgeries.
In fact, some 50 persons of the Whim/Bloomfield Neighbourhood Democratic Council (NDC) in Region Six (East Berbice-Corentyne) had their names fraudulently affixed to the backers’ lists for LGE in the Ancient County. They claimed they were tricked into signing an Alliance for Change (AFC) nominators’ list to contest the local government polls.

This led the PPP to file legal actions to have the names removed. However, High Court Justice Navindra Singh dismissed the cases, saying that after investigations, he did not find any evidence to convince him that the nominators were forced to sign the list.
Against this backdrop, the PPP, over the past days, had called for the Elections Commission to take criminal actions against parties or persons who are found culpable of fraudulently obtaining names of persons on their lists. In fact, the PPP General Secretary had reiterated those calls on Nomination Day itself.
Nevertheless, Jagdeo on Thursday went on to question the integrity of those parties engaging in these acts, saying that they are aspiring to get into the highest office in the country but are starting that journey with fraudulent acts.

“A lot of people would not even know they were there on the list, because they would never see the list. So there should be a requirement in the future that the lists of maybe all the candidates and backers be published for a few days before, so people can go and say, ‘I did not support this party. I did not sign any backers’; furthermore, that was forged’, and then take strong police actions – criminal actions – against those individuals. It’s utterly disgusting,” Jagdeo posited.
Current regulations allow the Chief Elections Officer (CEO) to publish the lists of candidates and nominators of each party at the end of Nomination Day. He would place these lists outside his office, and just over one week’s timeline is given to process these lists before they are gazetted nine days later.
This short and dated timeline has raised the issue of electoral reforms, for which numerous and repeated recommendations have been made by both local and international observers over the years.

While the need for electoral reforms, and constitution reform as a whole, has long been highlighted, during its campaign trail leading up to the 2015 elections which got it into office, the APNU+AFC Coalition had committed to have these reforms done, but is yet to take tangible steps to do so – something for which it has received much criticism.