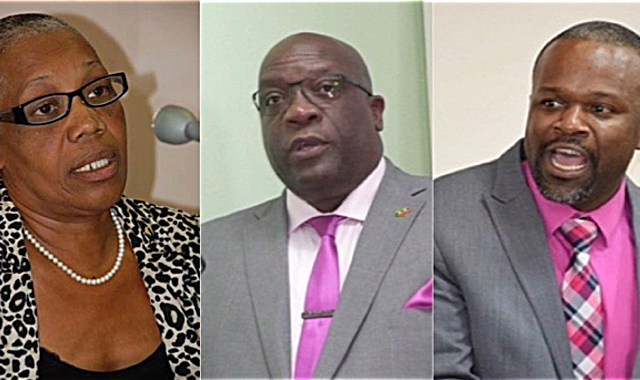 Basseterre, St. Kitts, 26th April, 2018 (MyVueNews.com) – While Government said it is addressing policies on the use of community centres, another Opposition Member of Parliament (MP) Konris Maynard denounced what he said was government’s refusal to allow the Labour Party to use the centres.

Speaking on Island Issues on 25th April, 2018, MP Maynard described the policy measure as draconian and out of step with a modern democracy.

Maynard said many radio stations are available for the airing of opinions and there really is no reason why a community centre should be off limits to the Labour Party.

And Labour Party Chairperson Marcella Liburd said when the Labour Party was in Government, both Team Unity and the People’s Action Movement were allowed to use the community centres.

Liburd said their correspondence seeking permission to use community centres have gone unanswered, but they are aware that instructions were given that the Labour Party must not have access to the community centres.

Meanwhile, also on 25th April, Prime Minister Dr. Timothy Harris said, during his monthly press conference, that new policies on the use of community centres are being developed aimed at better management, reduced abuse and wider access.

Harris informed that the policy reforms will be spearheaded by the Minister with responsibility for Community Development, Senator Wendy Phipps.

Harris also took the opportunity of his press conference to respond to a claim by MP Marcella Liburd that the keys for community centres in Ottley’s/Belle Vue were, allegedly, being held in the Office of the Prime Minister.

Harris stated, “Such a blatant and callous lie from the former Minister for Social Development deserves to be condemned for the mischief it was intended to cause, and the intellectual dishonesty of the former minister who would posit such untruth, even when one caller pierced a hole in her tissue of lies from his knowledge of how access is gained to the Conaree Community Centre.”

No timeframe was provided for the review and approval of the new policies regarding the use of community centres on St. Kitts.

Over 9,000 gallons of illegal fuel seized in first quarte