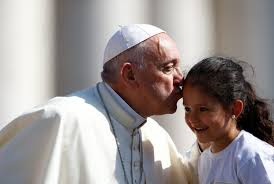 Pope Francis has criticized the Trump administration’s policy of separating migrant families at the Mexican border, saying populism is not the answer to the world’s immigration problems.

Speaking to Reuters, the Pope said he supported recent statements by U.S. Catholic bishops who called the separation of children from their parents “contrary to our Catholic values” and “immoral”.

“It’s not easy, but populism is not the solution,” Francis said on Sunday night.

In a rare, wide-ranging interview, the pope said he was optimistic about talks that may lead to a historic agreement over the appointment of bishops in China, and said he may accept more bishops’ resignations over a sexual abuse scandal in Chile.

Reflecting at his Vatican residence on his five years as pope, he defended his leadership of the Roman Catholic Church against criticism by conservatives inside and outside the Church who say his interpretation of its teachings is too liberal.

He also said he wanted to appoint more women to top positions in the Vatican administration.

One of his most pointed messages concerned President Donald Trump’s zero-tolerance immigration policy, in which U.S. authorities plan to criminally prosecute all immigrants caught crossing the Mexican border illegally, holding adults in jail while their children are sent to government shelters.

The policy has caused an outcry in the United States and has been condemned abroad as videos emerged of youngsters held in concrete-floored enclosures and an audio of wailing children went viral.

U.S. Catholic bishops have joined other religious leaders in the United States in condemning the policy.

“I am on the side of the bishops’ conference,” the pope said, referring to two statements from U.S. bishops this month.

“Let it be clear that in these things, I respect (the position of) the bishops conference.”

Francis’ comments add to the pressure on Trump over immigration policy. The pope heads a church which has 1.3 billion members worldwide and is the largest Christian denomination in the United States.

The president has strongly defended his administration’s actions and cast blame for the family separations on Democrats.

“Democrats are the problem,” Trump said on Twitter on Tuesday. “They don’t care about crime and want illegal immigrants.”

The U.S. crackdown chimes with a new political mood sweeping western Europe over the large numbers of migrants and asylum-seekers, most of them escaping conflict and poverty in the Middle East and Africa.

The pope said populists were “creating psychosis” on the issue of immigration, even as aging societies like Europe faced “a great demographic winter” and needed more immigrants.

Without immigration, he added, Europe “will become empty.”

EU to launch counter-tariffs against US on Friday

Transgenderism no longer a mental illness – WHO