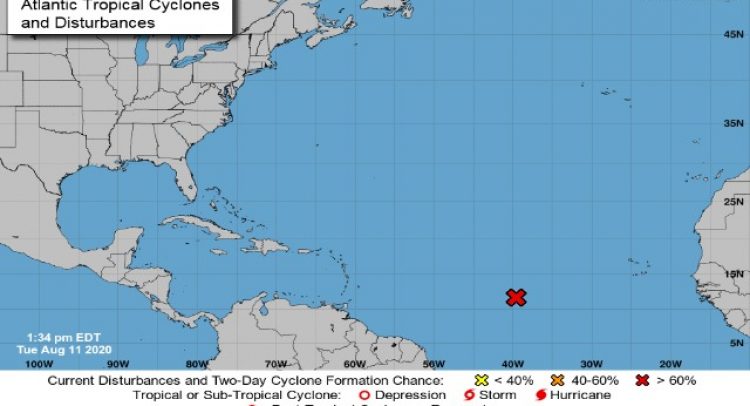 Basseterre, 11th August, 2020, (MyVue News.com)- A new weather disturbance is out in the Atlantic heading to the Eastern Caribbean and could affect the islands in its path.

The Antigua & Barbuda Meteorological Services has cautioned that they are following the progress of the system that could become a strong tropical storm, impacting the Caribbean.

Given the normal uncertainly in the forecast track, intensity and size of the developing tropical cyclone, it is impossible to predict, (at this time), what exact tropical cyclone hazard values, if any, are expected or likely to occur this far in advance, said one MET official.

However, residents in the Caribbean should expect the system to be in the vicinity by Saturday, as a tropical storm.

The MET office said that although, at this time, the threat level is little to none, it could rise to moderate with the potential for significant impact.

No immediate preparations are necessary, but residents have been asked to closely monitor the system in coming days.

Some models place the potential path in the area of Antigua and other islands, like St. Kitts & Nevis, in the northern Leeward Islands, by Saturday.

The MET officials also indicate that there is still time for other scenarios to play out that could see the system passing at a safe distance, but a close watch is suggested.

The National Hurricane Center based in Miami, Florida, said on Tuesday, 11th August, 2020, that the low pressure system is located over the Eastern tropical Atlantic, more than a 1,000 miles east of the Lesser Antilles.

Within the next 48 hours, according to NHC, the system has a 90% chance of formation.

Though shower and thunderstorm activities associated with the system decreased during he course of this morning, the NHC cautions that new activity is now forming near the center of circulation.

If these storms persists, said NHC, advisories could likely be initiated on a tropical depression later today or tonight.

They add that even if a depression does not form by tonight, environmental conditions are expected to become more conducive for development, while the system moves west northwestward, around 15mph, during the next couple of days.