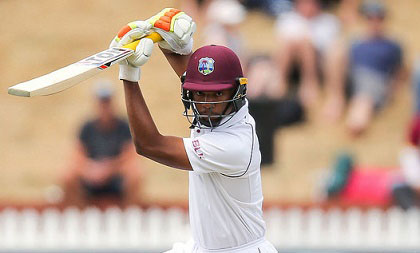 Test opener Kieran Powell found form with a half-century while opening partner John Campbell also notched one of his own, but CWI President’s XI lost a cluster of wickets to surrender the advantage on the second day of their three-day match against Sri Lanka.

The left-handed Powell, in the 13-man squad for next week’s first Test at Queen’s Park Oval, struck 60 in a 98-run opening stand with fellow left-hander Campbell who top-scored with 62.

Replying to the tourists’ imposing first innings of 428, the President’s XI were cantering on 146 for one at one stage but lost six wickets for 77 runs to end on 223 for seven.

They trail by 205 runs heading into Friday’s final day at the Brian Lara Stadium.

Earlier, left-arm spinner Jomel Warrican finished with four for 81 and off-spinner Rahkeem Cornwall, three for 24, as Sri Lanka were eventually dismissed on the stroke of lunch.

Resuming Thursday’s second day on 318 for six, they were lifted by Niroshan Dickwella who converted his overnight 26 into 74, made off 117 balls in nearly 2-3/4 hours at the crease with eight fours.

He put on 72 for the seventh wicket with Akila Dananjaya who made 30 from 54 deliveries with six fours. However, once the pair were separated, the last four wickets went down for 38 runs.

Campbell and Powell then punished the Sri Lankan bowlers in an attractive stand, which put the hosts in control of the contest.

Campbell’s knock was a typically breezy one, requiring only 52 balls and including 11 fours while skipper Powell faced 81 and struck seven fours.

The partnership was ended when Campbell missed a slog sweep at off-spinner Dilruwan Perera and perished lbw before tea.

Powell added a further 48 for the second wicket with Shamarh Brooks who made a patient 29 from 71 balls in nearly 1-1/2 hours at the crease.

On 123 for one at tea, the hosts lost Powell first in the final session via the run out route before Brooks perished, caught at slip prodding forward to off-spinner Akila Dananjaya.